On November 8th, 2018 I was lucky enough to premiere and release the CURTAINS / NEW RUINS split cassette tiled 'haliXkaliV2' (check that post here). It is a riveting release that well deserves your attention, as California's CURTAINS lay waste Loma Prieta style and Halifax' NEW RUINS weave an epic mix of post-hardcore, metalcore and screamo. Both bands share members with other, excellent bands, a few of which include Nuvolascura, Ghost Spirit, Heritage Unit, Frail Hands and Heisse. I thought it would be interesting to do a dual interview with the bands, asking them the same questions, so be sure to check it out below. And be sure to jam that split (linked here) cuz it's awesome. And don't forget that you can get a copy /75 from Zegema Beach in the U.S.A. (linked here) or from the Canada/International store (linked here). 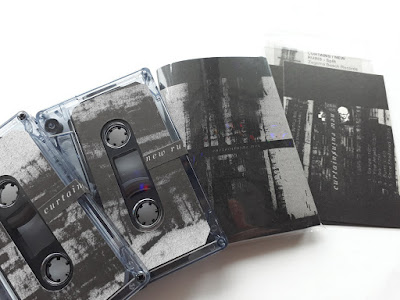 Listen to the split

1) What did you choose your band name? And why do you think New Ruins named their band that?
TAYLOR: I always really liked the way the word ‘curtains’ looks and sounds and like to think of curtains as things that darken rooms, facilitate reclusiveness, etc. It was mostly imagery based, haha. Kidcrash is sick.
ZACH: New Ruins probably chose that name cus they out here obliterating.


2) Were your songs written with this split in mind or did you already have them?
T: I believe we wrote all of the split songs after we had decided to do the split — I remember all of us being super stoked whilst writing them just to show them to NR lol.
Z: Yeah we had the split in mind while writing. It was cool to write with the format in mind.


3) What is your favourite song of yours on the split and why? Same question for the New Ruins side?
T: I think Since Shadowed is my favorite on the Curtains side, it has a little more of a patient tone than the others and is refreshing in the context of our side I think. ‘We Could Have Had It All’ is my favorite NR song I think, the ending is so epic I was losing my shit when I first heard it.
Z: My favorite song Burnt. Some of my favorite songs in general are around or below the minute mark. Shit should catch and move you immediately and keep you hooked—enough so to want to stick around for the next track. All for brevity. — My favorite New Ruins track is Never Knows Best. They do this super pretty intro that they build on very seamlessly into an epic breakdown/singalong bit. Shit gets stuck in my head.

4) What was the catalyst for this split happening?
T: Ghost Spirit and Frail Hands put out the 12” together and we’d joke about calling it ‘HaliXKali’ (Halifax and California lol) so Moore and I thought it would be sick to have our other bands do a split as well, leading to what would ultimately be called ‘haliXkaliV2’.
Z: Taylr’s answer heh


5) What has been most exciting for you regarding this split?
T: Sharing this release with such homies in NR is my favorite aspect personally, but also really enjoyed sharing what Curtains has worked on since Castellate, with more to come soon!
Z: Curtains in general is an exciting project for me as it’s the first time I’ve played guitar—same goes for Taylor. I love the process of pushing yourself to make things you like more than what you’ve already completed and are happy with—that forward motion excites me so much. I think we brought that motion into our writing and recording for this split and I’m stoked with how it came out. Looking forward to the next one!

1) Why did you choose your band name? And why do you think Curtains named their band that?
YOUSEF: Our band name was actually suggested by Lucas partially as a sort of ode to Kidcrash, partially because he liked the way it sounded. In retrospect, I’m thankful he made the suggestion because prior to that we were taking months to think of a name and getting absolutely nowhere. As for why Curtains chose their name, probably because you use curtains to keep the sunlight out of a room and those sick heathens want to be the force that keeps the sunlight out of your life, thus depriving you of essential vitamin D. You’ve only enabled their evil scheme further by releasing the album.

2) Were your songs written with this split in mind or did you already have them?
YOUSEF: Our songs had already been written before we decided to record a split together. Actually, at that point in time we had five unrecorded songs to choose from. When it came time to decide which two we’d record, we unanimously agreed on Never Knows Best and We Could Have Had It All. We feel they sound the closest to who we are as a band at this point in time.

3) What is your favourite song on the split and why? Same question for the Curtains side?
NICK: Choosing a favourite between our two songs from the split is difficult because both songs are very different sounding but have similarities with both climax and lyrical content. The lyrics are a lot more personal this time around where as with the songs on the EP there was only one song where I really wrote about my own feelings. Ultimately, I would say “We Could Have Had It All“ is by far my favourite song on our side of the split and even my favourite song among our currently released discography. There is just something that really takes over when the song peaks. You can really hear our sound and where we’re trying to go with our future releases. I think the song showcases the best of this current era of NEW RUINS. With that being said, Curtains contributed five powerful songs which I genuinely think are one of the better real screamo releases in the past decade. Curtains takes everything that I love about the raw and abrasive and mixes it perfectly with the clean and polished side of screamo. When I first heard their side I was blown away with how talented our friends really are. I personally love “Since Shadowed”. Its fast but also has hard hitting heavier parts as well. And it flows so well into the beginning “Never Knows Best”. Taylor’s vocals and riffing is nothing short of amazing and I can’t wait to hear more from them.

4) What was the catalyst for this split happening?
ALEX: The split came together shortly after Taylor’s band Ghost Spirit and my other band Frail Hands were finishing up the split release we did together. Curtains had released Castellate and I was listening to that EP all the time. I think I sent Taylor some rough recordings of songs from the New Ruins self-titled EP and they seemed super into them. We were both looking to release the new songs our bands had been working on and I think it was their idea we do the split together? We jokingly referred to the FH/GS split as Hali x Kali and because this was another split with Taylor and I’s bands it ended up being v2.0.

5) What has been most exciting for you regarding this split?
ALEX: Releasing these two songs has been super exciting because I feel like these songs are easily some of the best material we’ve written as a band yet, and represents us as a band much better than the EP does. On the s/t we were trying a lot of different things but with these two songs I feel like we really nailed the sound we wanted to achieve with New Ruins.
Posted by Dave Norman at 05:34