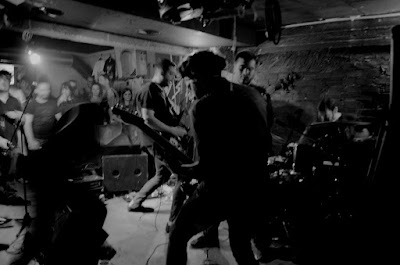 For fans of: The Ocean, Meshugga, Locktender, Perth Express, Fall Of Efrafa, Birds In Row and Hexis

KALPA are a five-piece from Athens, Greece. This premiere is the first taste of their 'A Grand Misconception' LP, an 8-track follow up to 2016s 'Dissociation' EP. As I walked cyclically around my block trying to get my baby to sleep, I jammed the LP in its entirety and I came to my own very concrete conclusion. KALPA are capable of harnessing the immense power of bands such as The Ocean, Fall Of Efrafa and Downfall Of Gaia (that generally weave very lengthy jams) and condense them down to songs two to four minutes in length. The band and a variety of European labels will be releasing 450 copies on 12" black vinyl as well as tapes by the up and coming Pattern Recognition Records.

(2019) KALPA "Discomfort/Anxiety" (from 'A Grand Misconception')

In just three minutes KALPA will take you on a treacherous journey. It begins with lone guitar feedback that abruptly shifts to the entire band chiming in with a slightly slower, melodic and post-hardcore touch than explosive metal/hardcore. I can definitely hear the Birds In Row influence here, and the subsequent, lush, swelling transition gives the song one hell of an epic feel, kinda like Fall Of Efrafa. There's a build after this that incorporates excellent guitars that climax at 1:50 when demonic growls appear out of nowhere like an audio nightmare and the song becomes crushingly heavy, easily lending itself to a The Ocean comparison. During the final minute we are graced with the sparingly used shrieky vocals that I yearn for, and definitely take on a larger role on the rest of the record. That's some fire, goddamn!!! 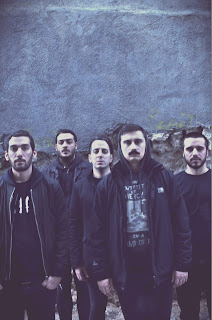 "Discomfort/Anxiety" lyrics:
Discomfort is what I’m taught. Anxiety is what I’m used to.
I meet dead ends. I’m forced to cross them.
It contradicts, so what?
I just have to grow up. So there’s that.
Sad hearts, hate eyes.
We don’t know about common courtesy. That’s because it doesn’t exist.
Silence is bleeding. Talkback is sweat.
People, I heard. People, let’s doubt all what is known.
Posted by Dave Norman at 09:27