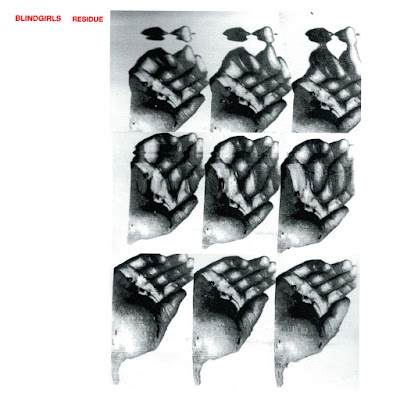 Well shit, I remember when I started this blog back in 2013. After a few months I started getting decent submissions from bands around the world, and was pretty goddamned pumped when the Gold Coast's BLIND GIRLS sent me an email from Australia following the release of their 2014 EP 'Efflorescence'. I have been following the band avidly since that review (which you can read here) and in December of 2017 I visited Australia and thought, hey, I wonder if BLIND GIRLS want to hang out. And then we did. We stayed in touch and guitarist/mastering guru Liam Kriz sent me songs every few months, which I purposely never delved too heavily into. In October of 2018 Liam sent me the final BLIND GIRLS masters for 'Residue' and I've been foaming at the mouth ever since. The band had 150 black 12" vinyl records made, of which Zegema Beach Records helped release, while Zegema Beach made 66 tapes in Canada with help from the band. In the off chance you missed the giant order links above...well, they are above!

'Residue' is not background music. It's not relaxing. Listening to it is not easy in the traditional sense of letting a song wash over you. These songs do nothing of the sort. If anything, they lull you to a cliff, push you over and into an ocean of gasoline and then set it ablaze. It's 11 tracks in a mere 21 minutes and things get pretty f'n real right off the bat, as the feedback intro of "Breaths" explodes at 9 seconds in a whirlwind screams, frantic strumming and lightspeed drumming, all of which is over by 1:05.

"3am" is one hell of a song, as it flies through its initial section in typical, older BLIND GIRLS fashion before the feedback soaked stop at 20 seconds. This acts as a beacon for the phenomenal guitar-work that follows and the subsequent breakdown that is repeated a second time with a flurry of poisonous shrieks. Good lord that shit is next level.

Expect it to go downhill from there? Fuck you. Not happening. Cuz they pull out a diverse, flushed out and very complete third track with "Loss Forms a Sequence", which nearly reaches the three-minute mark. It rides in on a nearly 30-second wave of ambient guitar, transitions to the first onslaught which you might think is heavy, only to crash down upon the listener with such intensity and force after the 46-second mark that you'll think you're drowning off in the gold screamo coast. The dual vocal attack here is utterly punishing as Sharni and Mark exchange feral screams that make the hairs on the back of my neck stand up. At 1:17 the song doubles back for another round of ridiculousness, led by a dangerously sharp guitar hook and more phenomenal screaming which eventually meets up with that ambient intro.

"Exertion" brings us back to the unrelenting emo-violence attack found throughout the entirety of the first two songs but includes a fantastical swing after the first 50 seconds that reminds me of a cross between Loma Prieta and Commuovere.

"Visitant" is primarily an interlude of brief drumming and distant, crawling guitars and leads beautifully into the sixth track.

Said sixth track is titled "The Ghost In My Eye" and it's, yep, you guessed it, amazing. The entire song dips in and out of extremes much like the third track, creating an unstable and impossible to anticipate path saturated with remarkable surprises. The most significant to note on this windy, treacherous journey is that unbelievable tornado of mathy screamo that tosses the listener around from 1:46 to its 2:30 conclusion. Goddamn I'm still so smitten with this.

"Dormant" is much more disjointed then the first half of the record, which is to say it takes its time with an awkward and angular approach until 42 seconds when a lazer riff blows the song up like a goddamned death star.

I wonder if "Cherish" was initially dubbed "Chill song" because although it's screamo and hardcore and all that, it is noticeably slower than everything else on the record save the "Visitant" interlude. It's a very cool song that bears more in resemblance to Canadian bands I Hate Sex and La Luna than the scorching and extremely dense Lord Snow-esque chaos brought by the rest of the record.

"Discarded Pictures" is another of my favourites for a multitude of reasons. First, that opening is frighteningly intense...and it doesn't even have vocals! Second, when the vocals do come in they are insanely fierce, pack one helluva punch and are accentuated nicely by more backup screaming. Third, the transition that builds from 1:13 is exceptional and leads to a short, faux-climax and instead opts for a simplistic, quiet outro.

"Nightshade" is another song rooted in twisted, dark and unrelenting screamy hardcore on speed with so many twists and turns that trying to unpack it all here would be too time consuming. Just take 2:33 out of your day and ride that rollercoaster.

The conclusion to this album of the year contender is "Burial", a three-minute representation of all of the incredible things that BLIND GIRLS have accomplished with this record. It takes all of the anger, aggression, sadness and frustration found in the band's music and buries it in your brain. Good luck completing this album and not wanting to do it all over again right away. It's that kind of album, as not many bands can boast similar magnetism and intensity that allures screamo fans for repeat listens.

A quick info session about the BLIND GIRLS tapes as I made and released them. There turned out to be 66 transparent red tapes, with a sparkle A-side sticker and download code. Regarding the covers, there are a few variants: 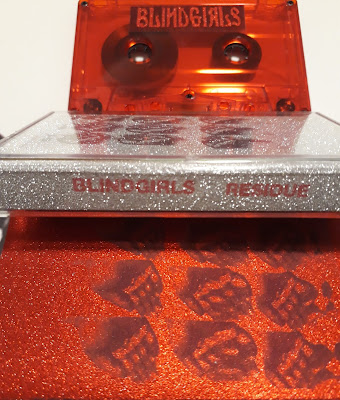 Lastly, until November 25th, 2018 we will have the "feel like you're really there" Japanese tour package which includes the newest tape releases from BLIND GIRLS, Sans Visage and Komusō. It's only $15CAD (less than $12US) for all three tapes and will be pulled the day the tour ends. Speaking of which, if you are in Japan and don't go to one of these shows...a pox on thee. Grab a tour tape package here. 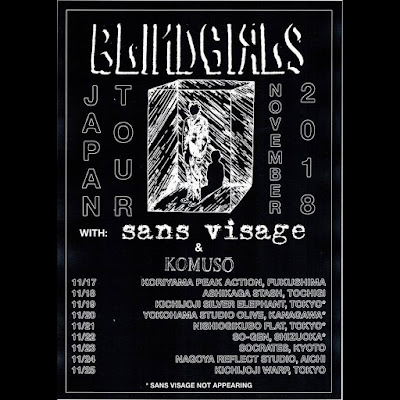 "The Ghost In My Eye" OMSB premiere