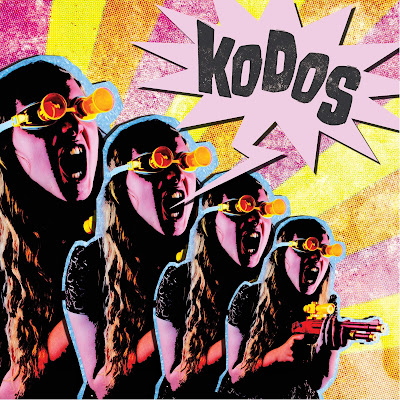 Did you hear that? No? That was the entire stream of the new KODOS album! You looked away for a sec and it was gone. Okay let's try again. This is the exclusive premiere for the new KODOS cassette EP. The band is an offshoot of Thisismenotthinkingofyou, Moss Rose and Yuri, but boasts the fastest, shriekiest and most furious style of the bunch. It's a mishmash of hardcore, screamo, emo-violence, false grind,  sludge and sass but in the end I would call this genre annihilation-core, cuz after you commit yourself to the LP, your future is dust. I don't really feel like I can give much of a direct band comparison, but if you were to throw Ed Gein, Amygdala, Yuri, Plague Walker and Welcome The Plague Year into a grinder it might occasionally resemble KODOS.

The amount of shit going on in addition to both vocalists venomously slinging poison on a consistent basis makes the entire ordeal a dense, volatile mindfuck - in the best possible way, of course. Now, I'm not even going to bother with a track-by-track review as each song is so short with so much to unpack that it would take you five times as long to read it then listen to the entire record. So instead, watch that acid-trip of a music video and then focus your ears for a mere 9:17 lest you miss one hell of a record.