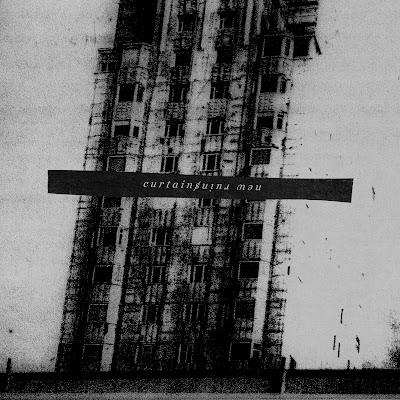 Following in the wake of the first haliXkali split between Ghost Spirit and Frail Hands, this 'haliXkaliV2' split cassette houses each bands' younger siblings. California's CURTAINS released a shattering three-song demo EP cassette on Middle Man Records earlier this year (order here) while Halifax's NEW RUINS digitally dropped a five-song EP a few months back. Each band takes their sound further, exploring what makes them great. You'll notice the CURTAINS tracks are scorching, with the band having members of Ghost Spirit, Nuvolascura (formerly Vril), Letters To Catalonia and SeeYouSpaceCowboy. NEW RUINS get much more diverse and dabble in new sounds (quite effectively, I must add) and features members of Frail Hands, Heisse, Rinoa, Wax, Grief and Open Border. You can physical copies from Zegema Beach Records in the U.S. (linked here) and in Canada/Internationally (linked here) out of 75 on smoky grey-blue tinted tapes with metallic liners. The bands will have copies by the end of the year. Enough information, on to the split!


(2018) CURTAINS side (from 'haliXkaliV2' split)
Bandcamp
Facebook
Holy shit this is just straight-up fire. Wasting zero seconds pummeling you into the ground, "Dampe" goes full tilt for 20 seconds before erecting a monolith only to shred it to pieces with those devastating shrieks. "Your Angels" is but 30 seconds but manages to lay waste in a fashion not unlike Loma Prieta's 'IV'. "Ark" is the first trek into two-minute territory and rides some very intense waves of emo-violence with a ridiculous amount of stuff going on, bringing Kid Feral and Cassus to mind, as well as a tranquil close. "Burnt" brings things back to lightning speed and beats the listener to a pulp in a mere 41 seconds. Finale "Since Shadowed" shows the band's love for Beau Navire at the forefront, slowing everything down enough to weave beautifully with a beam-of-light that appears in the form of a single guitar, being leader for the majority of the songs intense-but-melodic 3:26 conclusion.


(2018) NEW RUINS side (from 'haliXkaliV2' split)
Bandcamp
Facebook
NEW RUINS play a very different game, relying on carefully planted seeds that grow into fruition and pay dividends. These two jams are much longer in length, incorporating enough styles that I am legitimately lost as to what to label as, so screamy post-hardcore will do, but it's very limiting after listening. "Never Knows Best" ebbs and flows for over two minutes, injecting rock, post-rock and some intoxicating guitar progressions before the backdraft blows the door open at 2:18. At 3:15 the song climaxes and bleeds out, one note at a time, until it suffocates itself. Their second and final track is titled "We Could Have Had It All" and is quite the opus. Clocking in at 5:03, it takes much less time going for the jugular, as the serene intro is abandoned come one minute. Then at 2:36 there's a swing that clobbers me every time but is gone by the time I realize what's happening, giving it similarity to Fall Of Troy and Secret Arms in both sound and style. One last note is the truly epic conclusion that uses additional strings as reinforcement from about 3:40 and a subsequent, taxingly timed, breakdown session.

Stream the entire split via Souncloud