This is a pretty big tie-in post, starting with the QUIETUS review, followed by Jimmy's interview about the shortlived project and ending with a few words about the new Niboowin 12"LPs that arrived at my door last week. If you'd like to grab one we have them in the Canada/International store here or the U.S.A. store here. 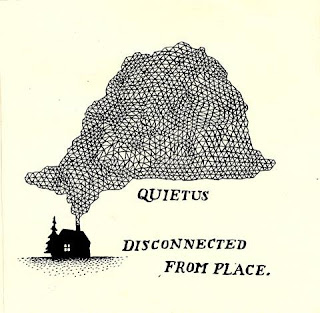 I was first introduced to QUIETUS when my friend Jimmy from Old Soul came over before their final European tour to drop off his car before going to the airport. We talked a bunch, and even did some podcasts (linked here), during which he mentioned that I should check out his old band QUIETUS that predated Old Soul. About a year later I finally got around to jamming it consistently and instantly slapped my head in remorse at waiting such a long time. The six songs on their only EP are moody, dark, brooding, screamy hardcore with a lot of post-hardcore vibes. It begins with "an utterance therapeutic", a song that builds for over four minutes and ends in a chaotic, stop/start screaming climax. Those vocals at the end, in particular, are fantastic. Screamed from the heart with enough passion to shred your ears, exactly what I want from my screaming. "artlessness" is pretty goddamn grooving once 1:19 hits, boasting a monolithic drive that will either get your head bobbing or crush you under its weight. About a minute later the song takes it up another notch with numerous vocalists taking stabs at volatile screaming over very panicked instrumentals. The title track "disconnected from place" is third, and envelops the listener in soaring post-hardcore littered with screams. And then...holy shit, "if you didn't care the first time, then it was useless by the second." This song is utterly amazing, and without a doubt the band's crowning achievement. Seriously this shit gives Old Soul and Niboowin a run for their money at some points. The opening is rooted in chaotic hardcore and reminds me a bit of a heavier Greyskull, with the first transition hitting hard at 30 seconds. This builds to 56 seconds when my life begins to fall apart. The guitars incorporate a stop/start German emo-violence thing with syncopated vocals that slide into higher, spacey riffing with throat shredding screams. This pattern repeats four times and climaxes at 1:25, leaving me fucking spent. The song takes a much deserved breather and floats around for another minute or two before building back to the close. "geographic dissonance" follows and is heavy and fast enough to remind me of Orchid although it definitely hits some spacey post-hardcore as well as pummeling chaotic hardcore in the vein of Crowning. Closer "we cant remember the name of this song...really." is fitting and lengthy, sounding the most like an Old Soul song as it includes a lot of atmosphere not generally found in screamo and hardcore.

In regards to the physical release, Jimmy told me that they made a bunch of cds, but only 10 copies are in existence as they were lost early on in their only tour. If you have one count yourself lucky as fuck.

The following is a brief retrospective of QUIETUS by Jimmy attempting to remember details from nearly a decade ago,

Quietus literally translates to “Noun: death or something that causes death, regarded as a release from life.” We were our name, Quietus was a formation of the end of Sight beyond Sight. Casey and Mike approached me after a previous project Adrien and I were in called Shatner Mask had disbanded. After joining the tail end of SBS, Mike soon decided to not continue with the project. Casey and I decided to ask Adrian to join on drums. With such a vast change to the sound and dynamics, a name change was necessary. I had recently watched the movie Children of men and the suicide drug used in the film was called Quietus. Thus the birth of the name and only line up.

We gelled instantly over our mutual screamo influences and quickly had an album's worth of material. Soon after we went to our good friend Kevin Kitchels studio in Lansing. Thus recording the album Disconnected from Place. It was an embodiment of the unsettling feeling of being a stranger to your own home. Our dear Friend Trevor Grabill brought the concept to life with the cover art. Music was our cathartic outlet, or as the album says “this is my therapy.” We all lived in a small city called Mt. Pleasant. Which is a conundrum of a place that I still live in. Being Comprised of 50% university students and massive casino. There is nearly nothing to do with the exception of hanging out with friends. The DIY scene had also recently taken a hit when the Wesley Foundation closed their doors to shows.

The existence of Quietus was short lived, we only played a handful of shows and went on one weekend tour with Cloud Rat, whom we shared a practice space in a basement with. Interesting side note Dillion from Niboowin’s first DIY show was to see Quietus and Capacitor play at Adrien’s mom’s daycare, Capacitor later became Old Soul after a couple lineup changes. After Casey moved to Marquette we seldom saw each other. We would reconnect from time to time, here or there, depending where any of us were living at the moment. In the next passing years, there was only a few times we got together to play again. We all started to pursue different projects and new avenues in life.

In 2016 Casey was involved in a fatal car accident on his way home from a show. It nearly goes without saying but the passing of such a young person never goes without devastating shock to those who were close to them. Old Soul was only a couple weeks away from leaving on our final tour, to those who have watched the final COTO video, we dedicated the tour to him and his memory. The music lives on as a added testament to his legacy.

There is one thing that always crosses my mind when I think of Quietus. Tell your family and friends you love them. Life is short as fuck.

(2010) QUIETUS - "if you didn't care the first time, then it was useless by the second." (from 'Disconnected From Place')

Buy Niboowin 12"LP:
in Canada/Internationally here
in the U.S.A. here