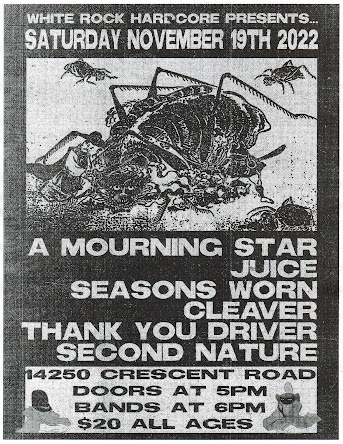 @Elging Hall in Langley on November 19th, 2022
Live Show Review
So the story goes THANK YOU DRIVER sent me their new EP, I was sent to another dimension, I cam back with tapes, then I went to go see them play a show in November alongside...well, alongside 5 bands that I knew absolutely nothing about. I went with the intention of making a music video using a new hi-def camera that good ole USofDave sent me, but as my old-ass computer had trouble handling the files and I passed it off to friend Trilly James to finish being cut. That took a few weeks, then the winter holiday came and I had zero time, hence the substantially late post about this killer show in Langley BC. Despite it being an all-ages show with some kids there and everyone I spoke to being super nice, there was some crowd-killing that really turned me off. I get moshing. I don't quite understand the windmills and such. But when you jump into the crowd and try to punch people in the back row who are just watching the bands...not cool. At all. Some big losers that night. Besides that, everything was just peachy! To the bands!!!
SECOND NATURE
For fans of: hardcore / powerviolence
This opening act featured the bassist of A Mourning Star on guitar and was more of a hardcore act than anything technical or metal. I'm pretty sure the vocalist of this band helped put on the show, and he was fun to watch and super nice, to boot.
(2022) SECOND NATURE
https://youtu.be/YiHcQw2JbW0
^\/`~~~~---------------00oOo00---------------~~~~'\/^
THANK YOU DRIVER
For fans of: (older) Cave In and Thumbscrew
The reason I went to this show, and the only band I was aware of on the bill, were the local young-uns THANK YOU DRIVER. They were all super nice (their dad even bought us all pizza after the gig and let me crash at their place) and put on a helluva show. Damon was running around sloshin' lots of water and sushi (and felt quite ill after the set, poor fella), Jeremy was whipping his guitar all over the place whilst still blazing it, Ethan is a goddamned machine on the drums (and not even 20!), while Hayden provided those sick grooves and backing screams. What's that? They played a Cave In cover? Fuck yes.
(2022) THANK YOU DRIVER "Moral Eclipse" (Cave In cover)
https://youtu.be/rOY3Vf16ap0
(2022) THANK YOU DRIVER "Dyer Blueprint" (official music video)
https://youtu.be/JFzYRG0r6GU
Linktr.ee
^\/`~~~~---------------00oOo00---------------~~~~'\/^
CLEAVER
For fans of: hardcore and death metal
This Burnaby band was very heavy and bordered on death metal. Super deep vocals and a violent-ass pit. Fitting band name.
(2022) CLEAVER
https://youtu.be/FiVdwG2jvoU
Bandcamp
^\/`~~~~---------------00oOo00---------------~~~~'\/^
SEASONS WORN
For fans of: Fall Of Troy and Black Nail
One of the reasons I like purposefully NOT checking out bands before seeing them live is I get to go in with zero expectations and therefore watch at least a few songs before deciding where to reside for the remainder of their set. Before this played Hayden from Thank You Driver noted that I was very likely to like this band. He was right. So very, very right. Mixing technical chops inspired by Fall Of Troy with the abrasive screamo of Massa Nera and the looming darkness of Glassing, I became instantly smitten. I even spoke with the band in the parking lot afterward so hopefully we'll see a Tomb Tree + SEASONS WORN release in 2023! I'm pretty sure I snapped a video of part of a new song combined with a song off their most recent '' EP (which fucking rocks).
(2022) SEASONS WORN
https://youtu.be/jH6C76L2ZJc
Linktree
^\/`~~~~---------------00oOo00---------------~~~~'\/^
JUICE
For fans of: Deadguy and Sick Of It All
This was another local hardcore band with a lot of support. This definitely gave me a mid-90s vibe, especially with the vocal trade-offs and immensity of the instrumentals.
(2022) JUICE
https://youtu.be/tbvnStTSFZ0
Bandcamp
^\/`~~~~---------------00oOo00---------------~~~~'\/^
A MOURNING STAR
For fans of: Poison The Well and Hopesfall
I had the pleasure of meeting Eli outside before the show without knowing anything about his band, and holy crap was I in gush-mode after their set cuz that shit was awesome. I totally get why they are the hometown heroes and have a huge following in and around the Vancouver area. Super fucking sick-ass metalcore in the vein of Poison The Well, Hopesfall, and Shai Hulud.
(2022) A MOURNING STAR "Discretely Shadowed Beneath A Mighty Wing" (from 'To See Your Beauty Fade')
https://youtu.be/UgiOkscdOGw
Bandcamp
^\/`~~~~---------------00oOo00---------------~~~~'\/^
~
Posted by Dave Norman at 18:36