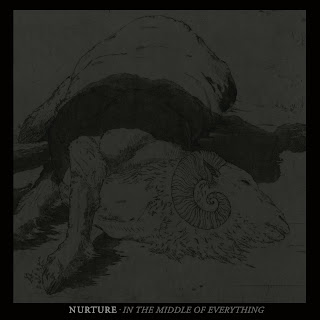 I was show NURTURE in 2022 after being informed that this was Sasha from Malevich's earlier screamo project. So I snagged the three-piece's second EP and jammed it on my phone sporadically over the past six months. I ended up loving the groovy, dark, screamy emo/hardcore and fell backwards into the bands remaining discography, all of which is good but don't grab me the way 'In the Middle of Everything' did.
Anyways, to go back to the start, the 'Demo' released in 2012 is slower and more emo driven with self-production. With the following year's 'In the Middle of Everything' it becomes apparent immediately that the band honed their skills and whittled their statue down, as opener "Eye on the Back of My Hand" is a fucking banger with some serious melodic hooks, sweet drum fills, and pained yells littered with screams. The swing at the song's midpoint is infectious as hell while still carrying a fair amount of weight to it, making the song an absolute standout and obvious choice as opener. Another righteous jam is the closer "Mercenary II" that follows a similar trajectory and is definitely faster than the two middle tracks.
The band's output slowed considerably following their first two EPs, as 2014 saw a single song on a split cassette and 2015 two final songs before disbanding (on a positive note) in April of the same year. Their 2014 'Antpile split' houses "I'll Bathe You In Jameson", a cup of repetitive noodles are served with various yells (and some singing) before the second half kicks in and brings in that thick, groovy style perfected on the previous EP. Their final two songs are also very good and are the heaviest the band recorded. "Posthumously" is feedback soaked and features some of the best vocals the band had to offer, while "Pick Your Pocket" is up there with the best songs they ever did. The first minute is a rollercoaster of noisy screamo, followed by a softer passage with distant wailing, and a climax of epic proportions.
Goddamn, what a band. Thank science for Malevich.
________________________________________
DISCOGRAPHY
2012 - Demo digitalEP (stream/donate/download here)
2013 - In the Middle of Everything cassette/10"EP (stream/donate/download here)
2014 - Antpile split cassette (stream/donate/download here)
2015 - Posthumously/Pick Your Pocket digitalEP (stream/donate/download here)
________________________________________
(2015) NURTURE - "Pick Your Pocket" (from 'Posthumously/Pick Your Pocket')
https://youtu.be/ifp6p7r7eqs
(2014) NURTURE - "I'll Bathe You In Jameson" (from 'Antpile split')
https://youtu.be/tetb2VW1hUk
(2013) NURTURE - "Eye on the Back of My Hand" (from 'In the Middle of Everything')
https://youtu.be/S6qgwrCXtOk