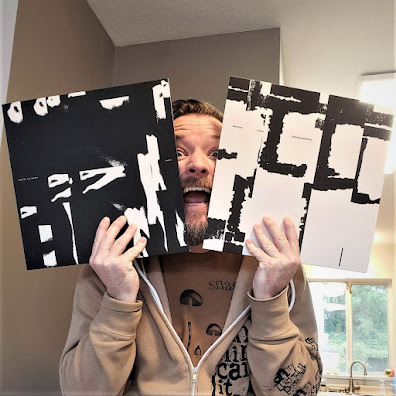 I feel like it's a rare occurrence when a band is able to make something intensely pulverizing and interesting without reverting to technical prowess or solos or the like, especially with how picky I am in the vocal department. So during this podcast Filip from Hexis showed me SHORA and I've been getting simultaneously crushed and mesmerized ever since. I even snatched the 12"s from Head Records and asked the band if they'd be interested in a tape discography, but the latter was not to be :(
Filip gave me an additional history lesson which helped me grasp their trajectory throughout their career. First releasing two songs on a 'Born Under Saturn split' 7" that essentially acts a demo, the band was finding their collective skillset but goddamn "Lethargy" and "Incrust" still go incredibly hard, they're just much slower and sludgier, reminding me of earlier Knut material.
The following year (2000) the band released what I would regard as their most consistent output, the seven-song 'Shaping the Random' EP. The speed, intensity, and general awesomeness are dialed up on every song just shredding the listener with nonstop dark, abrasive, nightmarish, grinding metallic hardcore. There are a few spots of noise/ambiance that are usually well-placed amidst two violent storms, with the exception of the opening "Prelude" track.
In 2002 SHORA released three new songs on the 'Switching Rhetorics' split 12" with Merzbow, finalizing the band's heavier output and leaving a mark on the Swedish hardcore/metal scene that continues to permeate today. The strongest material here takes the kamikaze metallic/hardcore/grind and trims anything under 500km/hour. "Erode/Implode" is 1:46 of destruction laced with lightning drums, harrowing screams that are so hot that they curdle, and guitars/bass that were extracted right out of my nightmares - hell, there's even some groovy moments. "Discussing Watercolor Techniques" barely cracks the two-minute mark and relies more on swelling instrumentals over sheer speed and ferocity, especially the awkward, jarring final 30 seconds oooooo baby. The band's final track is titled "Conciliated Coercion" and take heavy nods from later era/''-era Knut with some seriously unrelenting and powerful stuff, again concentrating on frightening chords and utter vocal meltdowns.
After this recording the aforementioned material, the band wrote at least two more songs that were played live but then lost their vocalist and became instrumental, thus leaving these two songs to the ether of of time. Luckily Filip sent me this soundcloud link that has the new songs at 7:07 and 17:50. but it is a live set so the quality is definitely lacking. The band continued on with one more EP before officially going on hiatus due to family and job commitments. 'Malva' is okay, and certainly gives more insight into what the band members would go on to do after SHORA. Very spacey post-rock with no vocals. Pretty good, but vastly different from the genre-bending brain-melt that was their earlier material.
________________________________________
DISCOGRAPHY
1999 - Born Under Saturn split 7" (download here)
2000 - Shaping the Random 12"EP (stream/buy digital/buy 12" here)
2002 - Switching Rhetorics (Merzbow split) 12" (stream/donate/download/buy 12" here)