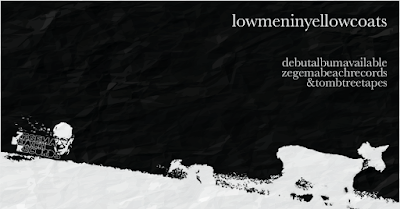 For fans of: The Fall Of Troy, Eyes Of Verotika, Mustaphamond, Ten Grand and Coma Regalia


Back in late 2017, Crowning was trying to book their first real tour, and without any real contacts, I was doing embarrassing things like googling “Ohio screamo band”. Which is how I stumbled onto the LOWMENINYELLOWCOATS’ 'Summer Demo'. The Akron 3 piece was the first to admit it was recorded live on a field recorder in as few takes as possible. And while It was certainly rough, it was frantic and had riffs for days. We booked a show with them at Blank Slate, and even though they dropped I kept in touch, and now here we are in 2019 and I’m absolutely stoked to put out their debut self titled LP.

They remind me of those first few years in the early 2000s when I was getting into screamo in Massachusetts, going to local shows and finding a taste for music that didn’t follow a recognizable structure. Seeing bands play to the height of their abilities, hanging on by a thread, but still hanging on. It was as exciting then as it is now. And right out of the gate it’s apparent that LOWMENINYELLOWCOATS don’t shy away from some of the tried and true elements of screamo. The art is a hazy black and white, the song titles are references that on their own appear nonsensical, and there’s samples for days.

This thing is angry, sharp, and chock full of piss. There’s some riffs that remind me of The Fall of Troy. There are unhinged and vulnerable vocals that remind me of the late great Matt Davis and Ten Grand, the kind that sound like they hurt every single time. Some of my favorite sections are the cleaner ones, like in “i need to return some videotapes” where the vocals really bounce around the riff in a more melodic way than I’m used to hearing from current bands while the hi-hat flourishes keep the pace on a firm lock. For a new three piece, they really have a hold on the importance of momentum and not letting anything wear out its welcome.

So do us all a favor and treat yourself to an album that holds on just long enough.