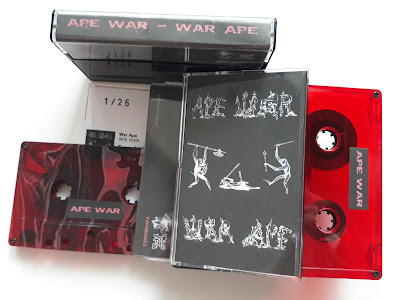 Woah, a band named WAR APE just sent me their album, and I just saw APE WAR in Vancouver. There are two bands with nearly the same name? Nope. I'm just an idiot. APE WAR is from Vancouver and had just released their new album 'War Ape', and finally I put two-and-two together and realized that they were one and the same.

First off, the live show I saw of APE WAR was fucking sick. Their energy and utterly destroyed vocals (as well as friendliness between sets) hooked me early and when I started Tomb Tree Tapes they were one of the first bands we spoke with. In fact, 'War Ape' is TTT001 and I couldn't be more stoked about it. I'm unsure if the U.S. store has any, but I think we sold all of our copies in the first week of releasing it. If you are interested in obtaining a copy be sure to hit up the band, as they initially had 20 of the 26 copies.

APE WAR has been around well over a half-decade now, releasing their first EP in early 2012. Their crusty, thrashy hardcore is tinged with grind and metal, complete with some truly outrageous (in a good way) vocals that are sometimes gruff and yelled and other times piercingly shrieked. 'War Ape' begins with "Other", a quick and violent romp through the aforementioned genre-grinder, with a slight slowdown during the last 20 seconds. "Tight and Weird" features some sick guitars that resemble a swarm of bees, while "Mathurbation" unleashes a ferocious second half not unlike a rabid dog. "Aged/Defaced" is chock-full of palm mutes and even surpasses the two-minute mark, although it is by no means chill, as the venomous first 50 seconds soon gives way to a dark, foreboding outro that lasts a full 1:26. "Archers" features panicked instrumentals that feel claustrophobic and are trying to get out, and make an escape they do, as can be heard by the ridiculous double-bass that acts as a flurry of footsteps to carry the song out. "Hack It Off" sounds pretty fuckin' evil, and I'm not even taking the song title into consideration. The riffs boasted at the one-minute mark are excellent and transition swimmingly into the onslaught that ensues. "Troll Drugs" spends the first minute in the instrumental territory before throwing down, "Blank Territory" is the longest jam on here at 3:30 (that switchover at 55 seconds is unreal) and closer "Thoughts and Prayers" is an assault on the senses and the perfect, raging conclusion.