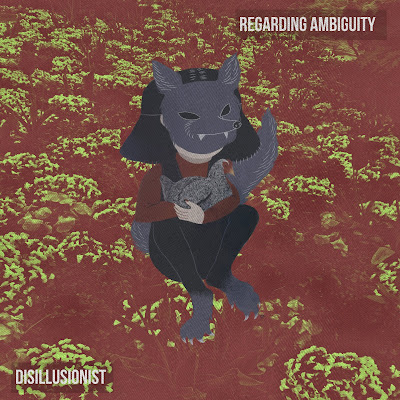 For fans of: Frail Body, Suffocate For Fuck Sake, Eyelet and Viva Belgrado

Yooooooo check out this new, stellar, four-track split between two incredible new Copenhagen bands. DISILLUSIONIST revealed a music video here nearly six months back and play a sick screamo/melodic hardcore hybrid, while REGARDING AMBIGUITY released an excellent six-song debut in February that caught many's attention. The split will be released on cassette by the bands and start shipping in October.

DISILLUSIONIST's opener starts gritty but injects a wonderful spacey riff over it all, creating a wonderful juxtaposition that continues to build in epic fashion until its 2:34 conclusion. And ooooo baby I love dem dual vox. I think Young Mountain and Okänt are pretty good reference anchors for this track.
(2019) 2 - REGARDING AMBIGUITY "Let's do like pugilists and throw our fists" (from 'Split') official music video
On September 2nd REGARDING AMBIGUITY premiered their music video for this song, and it's a fucking banger. The throat-shredding screams and thunderous instrumentals really hit from the get-go, with a dark and eerie midsection that is lifted come 1:30 with a beautiful climax. I get some Chalk Hands and Frail Body feels from this.


(2019) 3 - DISILLUSIONIST "The Oath" (from 'Split')
The second DISILLUSIONIST song is much more post-hardcore than the first track, creating a warm ambiance with slow, methodical instrumentals and semi-spoken/semi-screamed vocals. Once 1:10 hits we are met with a quick heavy section before reverting back to the head-bobbin' opening until they ditch it at 1:48 for the screamier stuff...capped off with a short instrumental close.

(2019) 4 - REGARDING AMBIGUITY "Keep Running" (from 'Split')
Closer "Keep Running" is a pretty lengthy track, almost equaling the other three combined. It features some very Swedish sounding guitar-plucking and anguished screams for the first three minutes before considering heading down The Exploration's old neighborhood, finally opting for epic post-hardcore/screamo instead. It's a beautiful, ethereal and enthralling conclusion that goes supernova come 4:40.