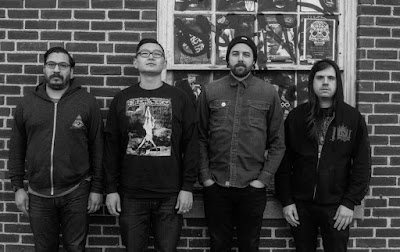 For fans of: The Chariot, Coarse and Cadence Fox
Bandcamp
Facebook

Hailing from New England, IRON GAG has been around for four years now and have an EP and LP under their belt, but today's song premiere is from their split 7" with Atlanta's Malevich. It's called "Ripped Off" and at 1:44 it blazes through dark, brooding hardcore with inadvertent nods to The Chariot and Perth Express for the first half. The breakdown and dual vocals that rain down upon the listener at the one-minute mark are the real deal and take the song to the next level, reminding me of bands such as WristMeetRazor, Artorias and Black Nail. Their side of the split was recorded by Will Killingsworth and mastered by Brad Boatright, two very prevalent players in the current hardcore/screamo scene. Malevich is no stranger to this blog as we reviewed their previous LP here and have been eagerly awaiting their material, as well. Speaking of which, they just premiered a new song "Trial of Metaphor" (linked here). IRON GAG will be doing dates on the East Coast of the U.S. and Canada which haven't seen posted yet, but they do have a show coming up on May 18th in Salem, Massachusetts that I've linked here. Enjoy!