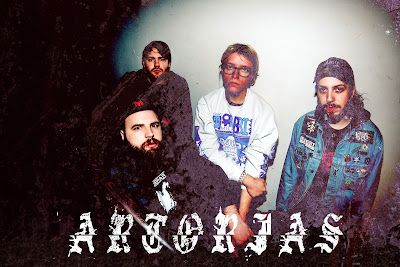 For fans of: Meth, Into The Moat and Black Nail
Bandcamp
Facebook

After finding ARTORIAS on a facebook group via vocalist James, we set up an exclusive stream of the band's third track on their new 'Rout' EP that will be streaming on Idioteq.com on April 13th, 2018! It was recorded and mixed by Zack Farrar at Choir Room Audio and mastered by Jack Shirley at The Atomic Garden. Logo and cover by Connie Sgarbossa and promo photo by Angelo Rossi. A five-song tape will be released shortly thanks to the fine folks at Contrition Recordings, Posers Inc. and Jems. James had this to say about the song "What Lies At The End Of My Intentions", which we are premiering today:


"Lyrically, the song is about knowing what happens when you take on something you know you can't win against. Musically, the end of the song is inspired by our friends in, the now defunct, Black Nail. The guest vocals are actually Connor from that band, which wasn't originally planned but worked out really well."

(2018) ARTORIAS - "What Lies At The End Of My Intentions" (from 'Rout')
"What Lies At The End Of My Intentions" is just 54 seconds, but chances are you might die twice in that extremely short time frame. The first 20 seconds are dark, brooding and feedback laden. Then, holy fucking shit, the band chimes in together with an absolutely crushing breakdown mixed with a nice panic riff that'll send most readers of this blog into a goddamned frenzy. Truly the Black Nail song of the album. Wowza!