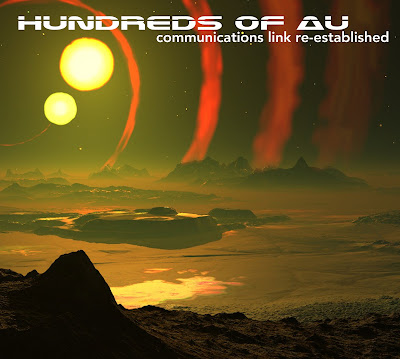 For fans of: Leveless, What Of Us and Crowning
Bandcamp
Facebook

HUNDREDS OF AU haven't done much yet, but considering members have spent time in bands such as You & I, NY In 64, Hell Mary, The Assistant, What Of Us and Capacities (and that's just the tip of the iceberg) you've probably already got a good idea of what they sound like. From Albany, New York, they released their 'Demo' tape EP in 2017, changed some members, and now have a new cd/cassette LP coming out in early May on Middle Man Records. The new album is titled 'Communications Link Re-Established' and if this single/premiere of "Deflection Arts" is any indication, it's going to be a rager and likely making my list of best LPs of 2018. It's heavy, relentless and chock full of screamy dual vocals, with a sensational turn just before the one-minute mark that'll leave you out of breath and partially deaf.

Before jamming, please take the time to read this little bit of info that Tom Schlatter wrote for this post:

"In the wake of the #metoo movement, one of the reactions from the right wing was to post statistics on men's mental health, to create a narrative that men "have it worse", a reaction which basically took the much overdue scrutiny toward sexual assault and tried to turn it into a competition between "who has it worse".  While I think men's mental health is an important discussion, and should be given attention, I found it strange that it was being used as a rebuttal or a way to deflect from the accountability that men need to take in the #metoo moment. I would prefer a conversation on men's mental health to come from a place of vulnerability, a place that challenges hetero-masculine norms and gender binaries, rather than used as a way to deflect from confronting an epidemic of sexual assault against women. I would prefer men take this opportunity in the #metoo moment to listen, learn and make some foundational changes, exchanging deflection of our inherent sexism with a long overdue confrontation of our language, behavior and culture."

You'd be silly not to catch the band live, as they are going on two short tours in June and August of 2018, which I've listed below. I'd also strongly recommend watching the full HUNDREDS OF AU live set from April 14th, 2018 in New Brunswick, New Jersey.