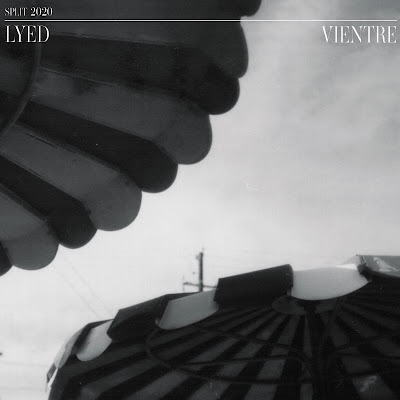 For fans of: The Bled, Shin Guard, Joliette and Viva Belgrado

Initially set for a late May release, this stellar split was pushed back a month so I've been jamming this thing for quite some time so I can say without a doubt that it's fucking killer. LYED are from Texas and have been around since 2013, play metallic hardcore/screamo and I even helped release their 2017 12"LP 'The Immolated Earth'. VIENTRE features members of Mico and play a very chill, beautiful but still cathartic brand of screamo from Colombia not unlike Viva Belgrado and Joliette.

LYED had the following to say about the split's origins:

"The idea for the split came around June 1019 (almost exactly a year ago) when Vientre did a US tour and Lyed booked a few dates with them in Texas. The connection between both bands started back in 2018 when Lyed did a tour in Mexico. Lyed had started to make some lineup changes ever since the release of the 2017 full length “The immolated earth.” For the Mexico 2018 tour we had Gabo from Saton fill in on drums and played all the dates with Emilio from Saton’s other band at the time, Derriben al Rey. They introduced us to Vientre’s music since then and eventually Lyed had the opportunity to play those Texas shows with them. We talked about the idea of releasing a split, and finally once Lyed realized a solid lineup in late 2019, headed to the studio to record two songs, which are the ones on the split. Vientre did the same and both bands have been planning the release since March 2020. For obvious reasons 2020 has not been a regular year at all, for which we’ve had to postpone the release until now. We’d love more than anything for people to listen to these songs given all the work and extreme patience we’ve had to endure to not only solidify our lineup, but also coordinate with our friends in Colombia. Lyed had plans to tour with Vientre to support this release and look forward to fulfilling all these plans in the future. Lyed’s also begun writing for an EP which will hopefully see the light of day before the end of 2020. Both bands appreciate all of the help provide by everyone involved in this project."

A tape limited release (50 copies) is now up for pre-sale at lyed.bigcartel.com, linked here.

(2020) LYED's side of 'Vientre split'
"Shadow Lands" is pretty short and quite aggressive, leaving behind the skin of their 2017 LP for they've obviously outgrown it. "Holy Locust" is longer (3:30) and dips into some post-realms, but it creates and excellent mood and still slaps.


(2020) VIENTRE's side of 'Lyed split'
"Zaga / Luna Roja" is on the band's more relaxed side and features more clean than screamed vocals, but as they can sing with the best of'em that's fine by me. "Frontieras" is much more cathartic and features a whole lotta screaming and some truly excellent guitar tones.