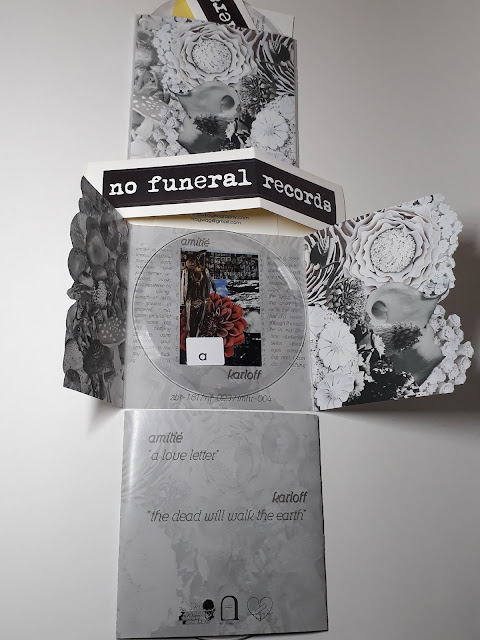 For fans of: Honeywell, Pique and A Paramount, A Love Supreme

When my friends Nate (Karloff/No Funeral) and Matt (amitié/Illuminate My Heart) asked me to #1 help release and #2 help premiere their split 5" I was down before even hearing the tunes. And now...ohhhh nelly I am fucking stoked to share this with you because not only are the songs probably the fastest, screamiest and most aggressive tracks each band has released, but also housed in some seriously gorgeous packaging and limited to a mere 30 copies! You can also find 50 copies on tape that were released by just the bands, with links to all included above.

(2019) KARLOFF "The Dead Will Walk the Earth" (from 'AMITIÉ' split)
A rabid, unsettling-yet-infectious mid-late 90s emo riot not unlike Honeywell. The first 10 seconds is all over the place, with the band settling on an opposing chill/eerie section that is as dirty as it is dreamy. The song builds on this but never quite goes off, as the opening is more or less the volume peak but the ending definitely gives closure, complete with more cacophonous screaming from Nate.


(2019) AMITIÉ "A Love Letter" (from 'KARLOFF' split)
The song begins with a very deep and intoxicating intro that transmits a mighty groove led by the bass and drums. Eventually the spacey guitars are smothered over top and the switches gears to face-melting European emo-violence at around 40 seconds and it is wonderful. Directly following is a nasty, hardcore breakdown and final metallic hardcore outro. Without a doubt my favourite song by this dense group of friends.
Posted by Dave Norman at 00:32