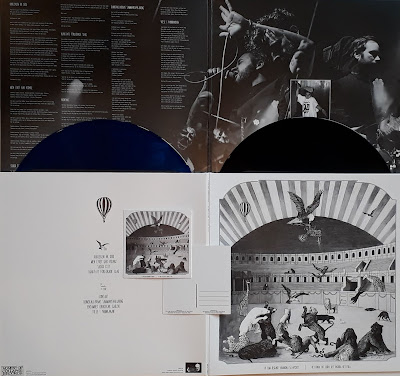 This year we were finally graced with a new LP from Sweden's finest, VI SOM ÄLSKADE VARANDRA SÅ MYCKET. Boasting members of  Khayembii Communique, Song Of Zarathustra, Cardinal Sin, Jazzbrunch and The Comedy (to name only a few) 'Det onda. Det goda. Det vackra. Det fula.' is sensational. Taking five years to write and record, the fruits of their labor are fucking delicious. Released on Zegema Beach Records on both black (/200) or transparent blue (/100) vinyl 12" with gatefold jacket as well as white and swirl cassette tapes (/50), everything looks as good as it sounds. What does it sound like? Let's take a look at each of the 8 tracks.

Opener "Kärleken är död"'s movement at 1 minute is apocalyptic in its delivery. The vocals are as harsh as Arvid has done for VI SOM thus far, and that chorus is as epic-sounding as sad. There's an ambient dip in the middle that acts as a pedal to give the song another spin, and considering how amazing it is, all hail the pedal.

"Men livet går vidare" is a winding, treacherous journey with some gorgeous swings that could topple the tallest structure with ease. In typical VI SOM fashion the song nearly reaches the seven-minute mark and utilizes a lull in the middle to build to a sensational, enthralling climax at 4:45.

"Sioux City" is the shortest track here at 2:36, leaving no time to breath and zero atmospheric breaks. It's a straight-up banger, plain and simple. When the song swings back like an iron, screamo pendulum come 40 seconds you best not be sitting down cuz that shit'll send you flying, complete with funeral bells at 1:20 to aid in your subsequent burial service.

"Hjärtats förlorade slag" finishes up side A with the most somber and slowest jam here. Generally with VI SOM that's normal, but this album in particular is on the heavier side, so the slowdown is both more noticeable and very refreshing. The triple guitars pluck angelic notes and weave them into some of the most depressing tremolo I've ever heard, and although I don't understand the lyrics they sound as if Arvid is truly singing "the saddest music in the world". During the final two minutes the song really picks up the positivity and the anthemic guitars (not unlike Respire) to lead the track out in inspiring fashion. 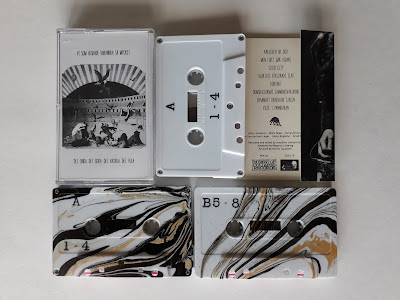 Side B begins with "Kontakt", the perfect extension of the previous song, and spins a dark web before settling into a very danceable groove just after the 40-second mark. The rhythmic bass during this section is fantastic, and adds yet another excellent layer on what I would consider post-hardcore/screamo perfection. Things get really big in an Archivist kinda way come two minutes, as the instrumentals have a movie-feel to them, and could easily be sprinkled into an epic scene to provide a stunning soundtrack.

"Dumskallarnas sammansvärjning" features guest vocals from one of the funniest people I've ever met, Shervin of Careless. It is a wonderfully orchestrated track that is easily one of the best here. Besides the sick dual vox, the use of instrumentation is fantastic, with a plethora of subtle nuances that pepper the song with so many spices you'll need repeat listens to catch them all. But Dave...is it epic? Ahahahaha you fool! Every VI SOM song is epic. It's in the band's DNA.

Continuing the slightly quieter second of the record is "Ensamhet urholkar själen", the only other song besides "Sioux City" to cross the finish line before the five-minute mark. This sports another solo guitar and heartfelt screams intro (intro...or entire song? more like the latter) that systematically mingles with the rest of the instruments, creating a heaving wave of exponential proportions that crashes in glorious fashion after three minutes and change.

Closer "Vilse i pannkakan" literally rolls in on the feedback of the previous track and quickly brings the heat, acting as the six-and-a-half minute climax that completes not only "Ensamhet urholkar själen" but the entire record. It's fucking fire. The guitars swirl around like 1,000 birds. The bass is as deafening as thunder. The drums carry the listener like an army of ants. And those vocals, oooo baby they are plucked from the heart, still searing, screaming in pain.

Without a doubt contender for best album of 2019 regardless of genre. These fine people have spent half a decade crafting a masterpiece and by god that shit shows and then some.