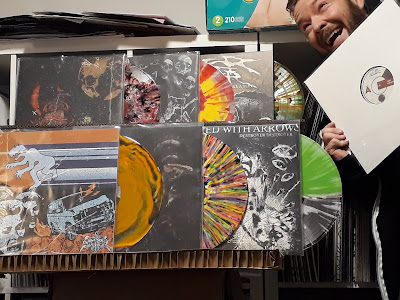 Jesus fuck christ what a month. What would have been an enjoyable and relaxing month became a shitshow thanks to storenvy's stock system, server ability and customer service. After some stock issues with Destroyer Destroyer, the Dr. Acula 12" straight up tore storenvy a new asshole. After noticing multiple errors, we contacted them and received a few pathetic emails back telling us to do the legwork so they didn't overcharge us, and they never even tried to restore stock levels for us.

So, as you can imagine, we are dropping that sad sack of shit known as storenvy in hopes that bigcartel can handle the myspace grind traffic. We have been assured by friends that their servers will hold.

On Saturday December 14th, 2019 Wax Vessel and Zegema Beach will officially release the final stock copies that surfaced after the storenvy implosion at the new site. Although not active yet, the store can be found via the following links:

It's also worth noting that until December 24th at 11:59pm PST all Zegema Beach Records store purchases are entered into a raffle to win a SAWTOOTH GRIN 12" test press of 'Cuddlemonster'! Orders of $50+ get 3 entries, and you can enter once at each store, making it possible to enter 6 times. Winner drawn on xmas.

***
Here's the tracklisting for OMSB mix#11 that was reviewed in November:


A PARAMOUNT, A LOVE SUPREME 'Crisis Meditations' EP
cassette (order here for US / here for everywhere else)
(listen here)

***Interviews/live shows/premieres coming up this month for sure:
- SNAG exclusive interview

During the following month, I will post reviews for those bands and link the tracks to the review so you can associate the two together. This way you can listen to a new song/band and have little-to-no bias. Below, I have re-posted the December mp3 mix that is used for this month's reviews.

The new 2020 OMSB mp3 Mix #1 has 5 songs from yours truly:
*-* sick Japanese screamo
*-* Netherlands comin' up big with a sick five-song EP
*-* sick new EP from a band that already released an LP this year
*-* that Ohio band everyone was thrilled to finally drop their debut LP
*-* some new, beautiful, rock/post-hardcore

Any bands/labels that are interested in having their stuff reviewed, please email zegemabeachrecords@gmail.com: with "Open Mind Saturated Brain" as the subject. Please keep in mind that I don't review everything, just what jives with the blog. I will, however, listen to everything you send me. I would recommend emailing with an idea for a song/album premiere 2 months prior to that song/album release date for a much stronger chance at being reviewed on this blog. Bands that have already had their discography reviewed can also submit new albums for review if they include song/album premieres.
Posted by Dave Norman at 01:26