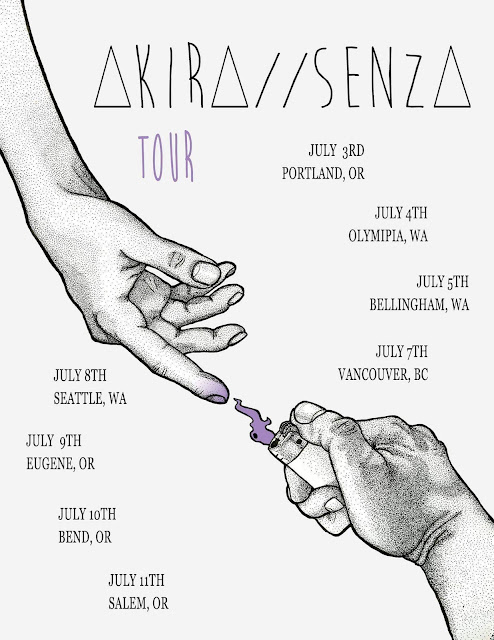 SENZA
Bandcamp
Facebook
For fans of: Jeromes Dream, Sleeper Wave, Republic Of Dreams, Celebration, Commuovere and The Truth About Dreaming

Today's exclusive stream comes from Eugene, Oregon's SENZA. This song will appear on an upcoming tour and split with their friends Akira. The tour begins on Monday July 3rd and ends on July 11th midwest U.S. tour with a stop over in Vancouver Canada.

The track being premiered is titled "Garmonbozia" and is the third of as many songs on SENZA's upcoming mini-cdr split with Akira. This song is killer, as are the rest of the split songs. "Garmonbozia" starts slow and picks up speed like a snowball hurtling down a cliff. After the 30-second mark we are in classic SENZA territory, with lightning fast drumming, abrasive guitars and shrieking that must be influenced primarily by Jeromes Dream and could also be likened to newer bands such as Celebration and Republic Of Dreams. At 40 seconds the song slows down a tad and opts for darker and semi-subtle breakdowns that lead to what might appear to be silence, only to reveal itself as the band members performing their instruments with their voices (Bigwig, anyone?) which make way for the short and violent climax.

If you dig this song in the slightest I would highly recommend visiting their Bandcamp page and donating when downloading their previous two endeavors in order to help support their tour. It should also be noted that SENZA was the only band in the U.S.A. that supported the 'It's More Like An Homage To You' tape aka the Jeromes Dream tribute compilation enough to set up their own pre-order, so they'll have loads of copies with them on tour. You can buy from ZBR here or directly from the band here.
Posted by Dave Norman at 05:31