I'm on my way to a cottage with my family for a week so I'll be MIA for the most part. ZBR Fest was a huge success. A million thanks to everyone involved, especially the bands and those who attended. The Мятеж European tour was botched completely and didn't happen but we were able to snag a bit of trip out of it. Because of the move to New Zealand on July 31st, 2017, Zegema Beach Records released Zampler #9 already which you can listen and download here. In August of 2017 we will release Zampler #10 which will be a "best of" from the first 80 releases that we did while residing in Canada.

And lastly, here's the tracklisting for OMSB mix#6 that was reviewed in June. Thanks to Jesse Mowery for pulling off half of these reviews.

1) WORST DAYS - A Previous Knowledge of Self Destruction 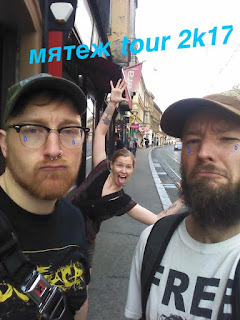 4) SEEYOUSPACECOWBOY - Pep Talk From a Nihilist

9) мятеж - Straight the Fuck Down

The new OMSB mp3 Mix #8 is 70% Dave and 30% Jesse Mowery and includes 10 killer tracks, such as:
*-* a member of Amanda Woodward's current/amazing project
*-* something that could be labeled as chaos-core, if it were a genre
*-* Drive Like Jehu meets Daniel Striped Tiger
*-* NEW ZEALAND!
*-* a band that released on Level Plane!!!

Any bands/labels that are interested in having their stuff reviewed, please email zegemabeachrecords@gmail.com: with "Open Mind Saturated Brain" as the subject. Please keep in mind that I don't review everything, just what jives with the blog. I will, however, listen to everything you send me. I would recommend emailing with an idea for a song/album premiere 2 months prior to that song/album release date for a much stronger chance at being reviewed on this blog. Bands that have already had their discography reviewed can also submit new albums for review if they include song/album premieres.
Posted by Dave Norman at 16:53