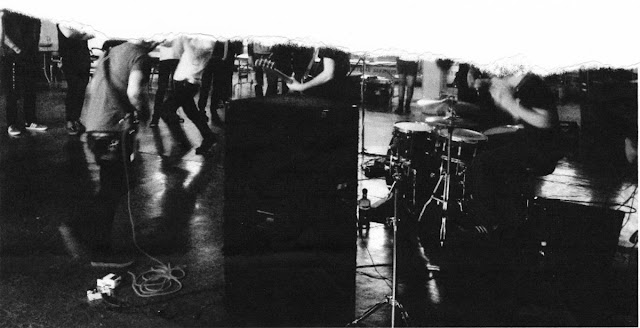 I was crazy lucky enough to have Thom Carney from the band MOTHLIGHT hit me up for an exclusive premiere from the band's upcoming tour tape EP. Be sure to listen to "Drawing Out the Dead Ends" below, their bandcamp page as well as their upcoming tour with Gas Up Yr Hearse, during which they will be selling the new tour cassette. I've reviewed the EP below and the exclusive stream is embedded below so listen to it while you read.
"Fiction Becoming Reality" starts the tour tape off in disjointed yet melodic fashion. The screaming and jazzy chaos weave in and out until the halfway point and then some slower but no-less epic instrumentals lead way to the final 20 seconds which have the song imploding in on itself. Song two is called "Immutation" and it gets going just before the 30-second mark and is a fucking stellar track. The lead guitar on this isn't too far from Gillian Carter and Neil Perry territory which does a hell of a lot more than tickle my fancy. After the craziness subsides at a little over a minute the song is led by rolling drums and heart-beating bass which culminate at 2:20 in fantastic fashion until the close at 3:08. The last new song is called "Drawing Out the Dead Ends" and it was my pick to post as a premiere because it's unbelievably good. In 2:58 MOTHLIGHT dismantle a lot of screamy hardcore booby traps by showcasing some truly intriguing and engaging music that jumps all over the proverbial board of genres. You've basically got one minute of amazing screamo, a minute of softer ambient stuff and then a final minute of utter annihilation. I don't need to say anything else about this because you can jam that shit above or open it in a new tab here. "House of Salt" is the only non-new song on here, but it was re-recorded for this release. It's also my favourite song off of their 'Momento' EP, which I've linked here.

The full tour has an event page and here is the Facebook link for that. Below are the individual shows: