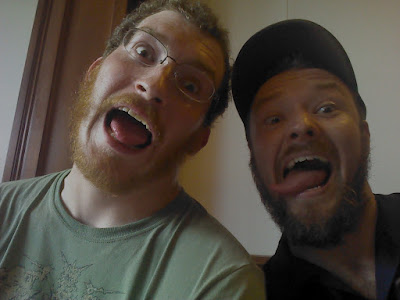 For fans of: Daitro, Loma Prieta and Altar Of Complaints
Bandcamp

I first met Jesse online after some screamo talk in random facebook communities and an order or two he placed on the Zegema Beach Records website. After about a year I realized how much we had in common and he showed me the band he was in at the time, called Altar Of Complaints (reviewed here), which blew my mind. After deciding that мятеж was going on tour it became paramount that we acquire a bassist so I asked my first choice Jesse Mowery. He agreed and we bonded like little kids at school during those two weeks in the mid-Eastern United States, some of which can be seen/heard in the мятеж tour documentary (linked here). Nearing the end of the tour we talked quite a bit about staying in touch and doing a split or two together in the near future. So, voila. Below is a review and exclusive song premiere for "So Far To Go" from the APOSTLES OF ERIS and The World That Summer split cassette that will be released on April 29th, 2016 by Zegema Beach Records (north america) and Dingleberry Records (europe). APOSTLES OF ERIS is not only a band Jesse is in, he is the entire band! That's right, another screamo solo project keeper, right here.

Jesse had this to say about the track "So Far To Go" which is embedded next to his statement.

"So Far To Go" is commentary on the current social and political environment in the US. The lyrics don't go in depth enough for how I feel about it, so here's sort of what fueled the song for me. This country continues to call itself the greatest country in the world, yet in the past few years it has become more and more obvious how much more work is needed to be done here. Growing up I was aware of many of these issues already due to the environment I was in, but many deny that racism is still very much is alive, don't believe that sexism is even an issue, and think that the "American Dream" is a real thing and we can all get rich if we just work hard. It's difficult for me to believe how blind some people are about these things, especially with the rise of discussion about police brutality, economic inequality, and of course the current poll leader of the Republican party, but it seems like a lot of people don't go out of their way to see things from a different perspective, or to care about things unless they have some effect on their lives. While I'm glad a lot of these things are being talked about more, we still have so far to go to truly be the "land of the free". It's 2016, things should be better than this.


1 - "So Far To Go"
The song begins heavy as fuck. There's no other way around it. The opening breakdown is dirty and thick and is slathered in distorted/screamy vocals that lead to a very Slayer and Metallica guitar driven section that culminates at 1:25 with some spacier and melodic stuff mixed in with the heaviness, which could be comparable to Alpinist and early Old Man Gloom. The song is definitely worth a listen and at 3:23 it's not going to take all night. Awesome, awesome stuff!


2 - "A Growing Emptiness With a Sense of Completion"
The shortest song on the APOSTLES OF ERIS side, this banger is over in a mere 1:43 but the combination of savage screams and catchy riffs doesn't let up for the entirety of the track. This is most reminiscent of earlier Envy, I'd say.


3 - "B.S."
This instrumental track is layered over spoken word from Robert Anton Wilson about acquiring new information and filing that within a predetermined mental schema as well as a lack of accepting and utilizing new information, thereby stunting any evolution needed to progress. At least, that was my interpretation of it.


4 - "Putting Faith Into Fantasy"
I may be biased, but I love this song. Jesse asked me to put some vocals to a song and this happened to be it. At 4:43 it delves into many genres including Euro-screamo (Daitro, in particular, comes to mind), bass-heavy, neocrust/emo-violence and dreamy post-hardcore. We both set vocals to our extreme distaste for religion and the systemic sexism, racism and general lack of reasoning that stems directly from an ancient and silly ideas.
Posted by Dave Norman at 16:43