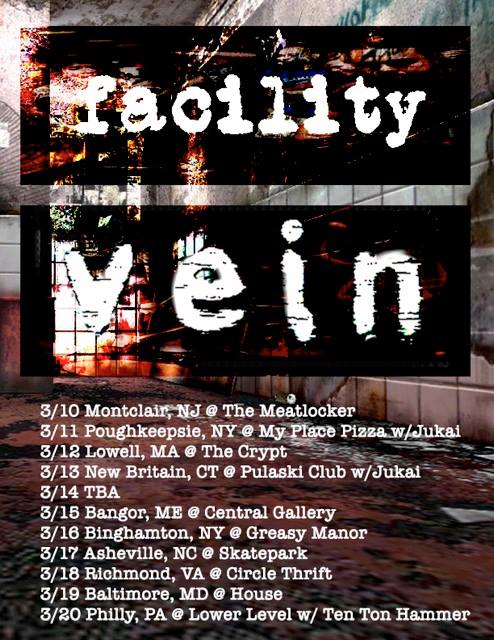 New Jersey's screamy hardcore/emo-violence/grind group FACILITY are unleashing three new songs from their forthcoming 'Year One Discography Songs' cd that you can pick up on the band's tour with Vein. Said tour, in case you are absolutely blind, is posted above this text. These songs are fucking unreal. "Beneath the Pillar of Light" begins and ends as an instrumental intro of sorts leaning heavily on ringing bass notes, angular and driving guitars and swelling drums. "The Shape of a Soul" is a slap in the face after such a lulling opening track as it bleeds in from the previous song and then crashes around with scorching drums until after 30 seconds when it builds on itself and then explodes into breakdowns that are at first massive and then massively beautiful. "An Anchor Hanging From Heaven" blasts out of the gates and is utterly pulverizing for the first 25 seconds of the song and at one minute shit gets out of hand in a real good screamo/emo-violence way that'll leave you praying you were on the tour route. Alas, I am not. Damn.


FACILITY - "Beneath the Pillar of Light" exclusive premiere!!!

FACILITY - "The Shape of a Soul" exclusive premiere!!!

Tyler from the band had this to say about the songs:


"These songs were written prior to our July tour in 2015. They are the last songs written with the original four piece line up of the band. This was the first time we attempted to write, what were for us, more complex parts and try new things. While they're very raw and trip up a little I'm still proud of them. If you saw us over the summer you definitely heard them live. These songs will be available on a Year One Discography Songs on our upcoming tour with Vein. They will be /100. We hope you enjoy them as much as we once did."

In 2015 FACILITY released a 4-song EP, a split with An Anecdote and self titled cassette EP. Jam them and download everything for pay what you want at the FACILITY bandcamp site linked below.