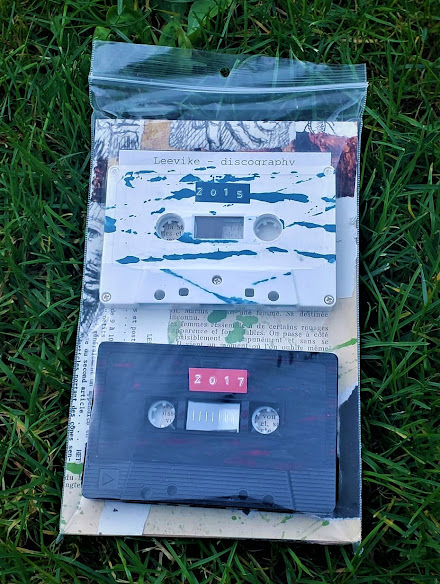 LEEVIKE was a solo project from Estonia that I discovered in 2021 due to the amazing Le Blast vault. This single dude was able to capture a ton of amazing screamo subgenres and also incorporates additional instrumentation on some tracks. Mesmerizing post-hardcore/atmospheric screamo, and ridiculously good/obscure stuff.
It becomes blatantly obvious on the opening track of the solo project's debut release '15' in 2015, as "esimene" houses some great midsection twists and turns not unlike Suffocate For Fucks Sake and Hundreds Of AU mixed up in a big ole bowl, but that epic ending wrapped around a wailing guitar solo and momentum changes are the highlight of the EP.
The same year '3' or 'kolmas' was released, I'm unsure the proper title, but it only houses one song titled "kolmas" and it begins much harsher but does bury some melodic leads (Piet Onthel, anyone?) and even boasts what sound like dual vocals. The midsection becomes a post-rock/post-hardcore journey that injects some fantastic flute into the mix, making it a truly standout jam, as the flute eventually meets up with everything else for the conclusion and it's fucking amazing. Respire-esque? You betcha.
In 2017 LEEVIKE released two tracks on something called 'tracks from nmfm collabs' which has gotta be, track-for-track, the best release. Opening with "neljas", this thing is less harsh than the "kolmas" and continues the instrumental variation, leting a trumpet take root to an extremely exhilarating degree, but there are a few dashes of the heavies. "viies" is a tap-happy screamo jam that Native, Party Hats, The Reptilian, and Sinatra would be proud of. Perhaps the most versatile and strongest jam they released, the feelings conjured and warm embrace during the first minute-and-change are joyous. At 1:12 the songs dives headfirst into Vi Som Alskade Varandra Sa Mycket territory with that gorgeous tremolo followed by a sick-ass stop/start screamo section that La Quiete might have conjured up. The second half is a lush, Via Fondo-esque dreamy section that builds to an utterly fantastic close.
Last up is the longest release, a five-track EP titled '17' also released in 2017 (duh). With the collab tracks veering off into semi-experimental territory, this death release seems to be more cohesive and direct, but I'd be lying if I said the 'tracks from nmfm collabs' weren't LEEVIKE's crowning achievement. This release's sound lies more in dark, nightmarish screamo whilst still retaining an obvious LEEVIKE sound. There's a lot of variation within the songs too, as opener "kuues" is a smack to the head, while "seitsmes" is slow, brooding, and eventually kinda metal. "üheksas" weighs in at more time than the first two tracks put together but keeps the pedal to the metal for majority of its duration and is probably the heaviest of the five despite a very dreamy ending. Closer "viimane" is an excellent swan song, showcasing everything the band can do, but it's track three titled "kaheksas" that is the cream of the crop here, firing off sick notes, time changes, and throat-shredders left right and center.
You likely have never heard of this amazing project. But now you have. Enjoy!
________________________________________