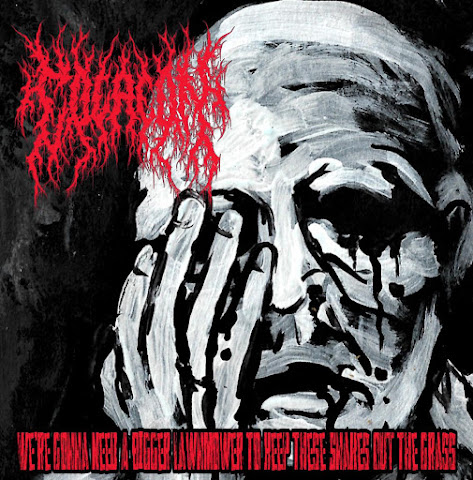 For fans of: From A Second Story Window, SeeYouSpaceCowboy, Pacmanthemovie, Wreck Of The Minotaur and Noise Trail Immersion
Bandcamp
Facebook
orders open October 7th, 2022
A year or two ago my friend AJ hit me up about painting some tapes for his band. I did. I enjoyed the tape, but I don't think I heard the songs until I was basically placing the order. About a month ago AJ hit me up again about doing the same thing, but this time I took some time to jam the songs before sending it off. I was so damn impressed that I immediately asked if Tomb Tree could help release it. They said yes. They made a music video. And now here we are.
COLACON began in 2020 as a project between two best friends that live in Columbus and Macon (hence the name, a mixture of the two cities) that was originally supposed to be lyrically based around an Orc town, but the two decided to drop the theme and just bang out tons of ridiculous mathcore/metallic hardcore/myspace tunes. Most jams hover around the one-minute mark and are bursting at the seams with nutty riffs, brain-slapping time changes, and commanding/sickening vocals. When I listen to most of the songs on 'The Pestilent Sickness' I get a condensed From A Second Story Window kind of vibe, but I think most people will hear something different. One thing is for sure, this shit rips.
(2022) COLACON "We’re Gonna Need A Bigger Lawnmower To Keep These Snakes Out The Grass" (from 'The Pestilent Sickness')
https://youtu.be/j_3uKorjzzM
Posted by Dave Norman at 19:15