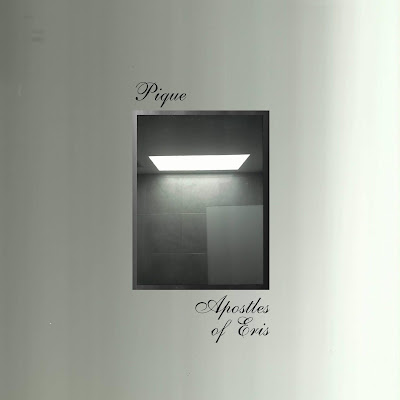 For fans of: Cease Upon The Capitol, Capsule, Funeral Diner and Iwrotehaikusaboutcannibalisminyouryearbook
APOSTLES OF ERIS
Bandcamp
Facebook
PIQUE
Bandcamp
Facebook
Yet another released fueled by the 2014 мятеж/People's Temple Project split 7" and U.S. tour, this time with Jesse and Dave of мятеж doing everything in APOSTLES OF ERIS and Larry from People's Temple Project being the guitarist and one of two vocalists in PIQUE. Dave also runs this blog and Zegema Beach Records while Larry very fucking obviously runs Larry Records. The split 12" houses seven tracks by each band, all mastered at Dead Air by Will Killingsworth, releases in full on December 11th, 2020 with pre-orders opening simultaneously via Zegema Beach Records, Larry Records and Clever Eagle Records. We were hoping to have the records in time for the release but it looks like late Dec/early Jan is when they'll be arriving unless there are any hiccups at the plant.
(2020) APOSTLES OF ERIS "Doubt" (from 'Pique' split 12")
(link to youtube video here)
First and foremost it should be noted that Jesse Mowery is incredible. Utterly, unequivocally godly is he. Jesse wrote, played, and recorded all of the instrumentals on our side. All of them. Yep. All. And he also shares vocal duties with me. And he's a beautiful person. I love you, Jesse.
Jesse really likes Cease Upon The Capitol, Capsule, Daitro, Via Fondo and A Flower Kollapsed (to name a few), and all of those bands are excellent reference points to his creative endeavors, but by no means are they tied to said points as there is an undeniabe Jesse Mowery flair to any song he partakes in.
As I wrote the lyrics for this, our entire side of the split is about the constant fog of living, perpetually being lied to and manipulated by forces seemingly beyond our control, and the helplessness and breaking that many people experience living in a racist, sexist, economic-fueled, corporate, police state. The songs follow a linear progression and are titled thusly: Lost, Haze, Lies, Doubt (this premiere!), Isolation, Numbness, Defeat.
(2020) PIQUE "My Roommate Caught Me Crying To Daniel Johnston This Morning" (from 'Apostles Of Eris' split 12")
(link to youtube video here)
I've been jamming Pique since their inception and helped premiere some of their earliest material on this very blog. I always liked the band a lot, but on this release good fucking holy lord of science do they step it up and throw down some of my absolute favourite screamo jams of the year. Jesse Mowery pointed out that they remind him of Iwrotehaikusaboutcannibalisminyouryearbook (and this was his only comparison) while I definitely hear Funeral Diner sneaking into their sound more and more. In general it's much heavier, darker and was much better recorded.
On this track, however, we are met with a slightly more playful style of screamo that ties in excellent bass, guitar and drum rhythms in a mere 60 seconds. Channeling part Iwrotehaikus and part Terry Green, I shit you not. This track rules.
Posted by Dave Norman at 23:08