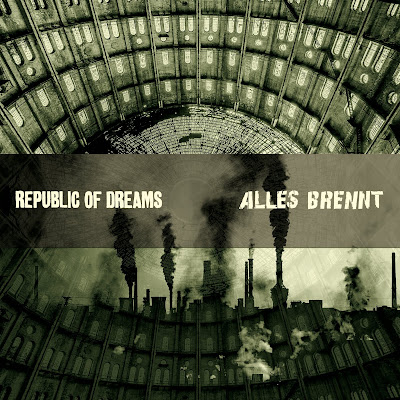 It's Family Day over here in Canada, so I thought it would be fitting to premiere the very anticipated REPUBLIC OF DREAMS / ALLES BRENNT release on said day. Why? Because Lars is family. Lars (ROD) and Sabine (PATH) are wonderful people. Their hospitality is endless. The vegan cooking unparalleled. And there's just something indescribable about watching my son and their kids interact. Sven and Jan (ROD) are also amazing folk who make truly remarkable music. There's a million more things I could type, but that's enough for now. Here's some fucking fire.

(2019) REPUBLIC OF DREAMS / ALLES BRENNT 'split'
Who's been waiting forever for new Dreams Warriors? This guy. And you too, I'd imagine. Well, REPUBLIC OF DREAMS is back with five new jams that'll have you shredded and perplexed, all whilst simultaneously chillin' on cloud nine. Halfway through opener "from rubble to bubble to bust" there's a few isolated drum solos before the apocalypse hits and reminds us all that ROD is GOAT. That's right, Goatrod. "turning flesh into metal" probably has the darkest vocals the band has on record, "the altruistic hypocrisy of watching someone drown" gives the feeling of falling off of a skyscraper and the subsequent fall, "a slew of slogans" buzzes around for a bit before attacking and closer "never again" is a clip of Paul Celan reading his poem "die todesfuge" which he wrote as an attempt to deal with the holocaust.

The band had this to say about the clip:
"we know it is controversial around some topics but it is really shaking and intense and we felt it is soo important these days as facism / nazism is on the rise in germany / worldwide again that we wanted to put it on the record as well ... there will be explanations and more info about it with the record. if anyone is interested - you can always contact us..."

ALLES BRENNT are from Versmold and are new to me as well as downright excellent. The late 90s/early 2000s German hardcore meets Orchid hybrid should be up any screamo enthusiast's alley. Instrumentally the band can be compared to Orchid, Louise Cyphre and Arsen but vocally it's much darker and crustier bringing to mind Circle Takes The Square and Yung Nat$. Opener "hellhounds" will give you a shot from the get-go, but it's the closer "coercive power" that goes the hardest.

REPUBLIC OF DREAMS discography review
Posted by Dave Norman at 23:59