A PARAMOUNT, A LOVE SUPREME
"i am young without wilderness"
exclusive song premiere 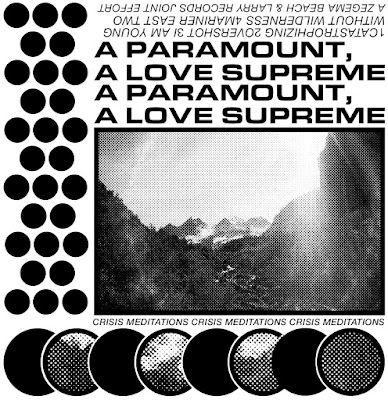 Remember earlier this year when Newark, Delaware's A PARAMOUNT, A LOVE SUPREME released that unreal demo? Well, myself and Eric from Larry Records have been salivating ever since, so we hooked up with the band to release their full debut EP 'Crisis Meditations' on cassettes /50 on November 15th, 2019. The full 4-track EP goes live on the same day, but don't fret cuz we've got a brand spankin' new tune that'll blow your socks off. I hope you're wearing socks, cuz otherwise your feet will likely explode in a smelly mess. If you like your screamo with heavy nods to the early 2000s mixed with driving, explosive Richmond-esque metalcore you are in a for a treat-and-a-half.

(2019) A PARAMOUNT, A LOVE SUPREME "i am young without wilderness" (from 'Crisis Meditations')

The third song on the EP is "i am young without wilderness" and it showcases the band at their most polarizing extremes. The opening minute-and-a-bit is centered around a looping guitar progression that draws the drums in on its third lap. By 55 seconds the sway hits a groove and with the help of Drew's bass pushes onward into a slightly post-rock/post-hardcore climb. Appearing to reach the summit during a brief stop from 1:43 to 1:57, instead the drums crash back in to give birth to an astonishing second-half of the song. At 2:34 the listener is thrown off the edge of the cliff with a piercing guitar riff that switches to a start/stop section in perfect time with the bass and drums, all capped off by sensational spoken word/screamed vocals by Liam. By this time I'm generally giddy-as-fuck but then the first massive breakdown hits Black Nail-style, with crushing instrumentals and death shrieks. At 3:40 the band slows it down half-time and annihilates whatever doubts might remain about this not being one of the absolute best songs released this year. Jesus fuck christ this EP is so good y'all are gonna be making your year-end lists on November 15th.

A PARAMOUNT, A LOVE SUPREME 'demo' review
Posted by Dave Norman at 08:06