I am extremely stoked to bring you a premiere for a tour cassette tape demo which the bands will have with them on tour. Each band contributes a demo version of a song that will appear on a complete split later this year.

I know PEOPLE'S TEMPLE PROJECT because we toured together last summer during the 2015 bagel tour with мятеж. Here's a video of them playing the new "Untitled" (demo) that is premiering above!


SLEEPER WAVE will be releasing four brand new songs on the 8-band/4-country split 2x12" that will be released in late 2016. Here is the only one of those songs that has been released thus far, and it can be found on the Zampler #7 compilation titled 'MI Does the Dyin, Fleet Just Does the Flyin' and the track title is "Counter-friction".


PEOPLE'S TEMPLE PROJECT and SLEEPER WAVE go on tour together in the following cities and their respective links (if available) starting this Friday August 5th, 2016: 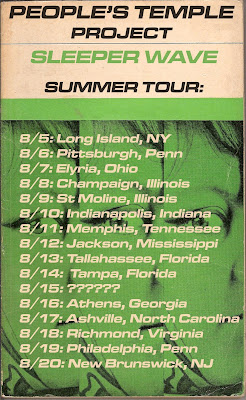