First and foremost, let's talk about Swamp Fest. What is Swamp Fest? According to one of the organizers:


"Swamp fest is a heavy, emotional music festival with the goal of creating a welcoming and safe environments for lovers of screamy, discorded, and cathartic music. We wana shake the tough guy attitude in heavy music and create space for everyone who would like to be involved. We posted a general description of values tht we seek to uphold i.e. Pro queer, pro women, anti racism, anti violence, anti capitalism and more with the goal of making sure it is known tht this will not be a weekend of apathetic hate mosh but instead a socially consious gathering in which individuals make friends, learn from one another, and take care of each other. Last year swamp fest gave me a since of community I had never felt before and I think this year will be just as great if not better!!!!"
~Mitchie Shue (Truman/.gif from god)

There are three days, the Aug 12th pre-show with .gif from god, and then day two Aug 13th мятеж, What Of Us, The Catalyst, etc. and the final day Aug 14th with Ostraca, Truman, Amygdala, etc. The link to the facebook is right here and you can grab a pass for all the days as well as the Fest comp cassette, linked here.

While I'm away Zegema Beach Records will be having a 25% off sale so hit that up here and just input the code "mrtex2016" upon checkout. There's a ton of new stuff there including Respire shirts, The Reptilian tapes and flexidiscs as well as a ton of new stickers.

Lastly, I played an epic basement show in Cambridge at the Lazy I Ranch on July 30th with Black Love, Respire, La Luna, Terry Green and the band I do vocals for, The World That Summer. Here's a short, 7-minute video that includes a minute or so clip from each band.


Here's the tracklisting for OMSB mix#6 that was reviewed in June. 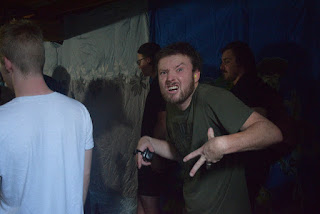 4) PET GENIUS - Man of the Mountain

5) DEFTONES - Around the Fur

11) LIBIDO WINS - The Stendhal Syndrome of Wasting Away

***Interviews/Live shows coming up this month for sure:
- not sure, I'm on tour so we'll see - oh there's definitely at least one song premiere!
- The Reptilian, Terry Green, Nanette and Wimp City live show review

The new OMSB mp3 Mix #9 has 11 songs in 35 minutes, including:
*-* a song premiere (track 2)
*-* perhaps the first screamy hardcore band with a violinist
*-* what sounds like a Spanish Itto
*-* a song by a band that I refused a review for in 2015, and now I'm drooling all over their 2016 effort
*-* a Blood Brothers and The Jonbenét inspired band that was lost in a sea of clones

Any bands/labels that are interested in having their stuff reviewed, please email zegemabeachrecords@gmail.com: with "Open Mind Saturated Brain" as the subject. Please keep in mind that I don't review everything, just what jives with the blog. I will, however, listen to everything you send me. I would recommend emailing with an idea for a song/album premiere 2 months prior to that song/album release date for a much stronger chance at being reviewed on this blog. Bands that have already had their discography reviewed can also submit new albums for review if they include song/album premieres.
Posted by Dave Norman at 00:07