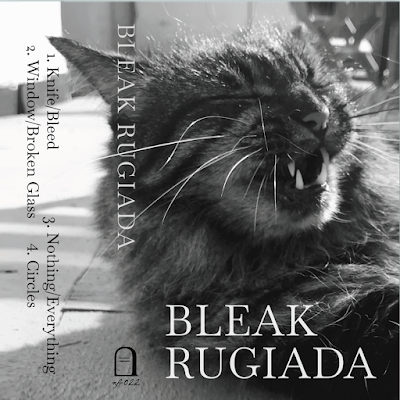 Need something to excite you? How's about a new band featuring members of Marée Noire and The Ultimate Screamo Band? Yeah, I thought that would do it. So, Quebec's BLEAK RUGIADA is releasing their debut four-song EP on cassette via Ontario, Canada's No Funeral Records. There's even a release show with fellow No Funeral alumni Politess next Friday December 6th, 2019, which is linked for you right here (poster below). 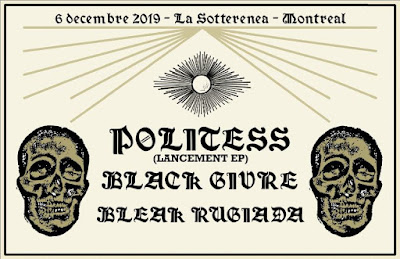 The opener numbs the senses for the first 30 seconds before going ballistic with sassy yells and throat-wrenching screams. This straddles a fence somewhere between Melt Banana and Kiss 2 and I fucking love it.

The longest track follows and surpasses the four-minute mark, being rather obvious from the atmospheric and eerie intro that features some distant, spacey, spoken-word (or is that an audio clip?). At around two minutes the song recedes slightly before sliding into a sensational screamo jam not unlike Welcome The Plague Year or Battle Of Wolf 359, finally erupting in a flurry of drums, deep bass blasts, a vast array of time changes, venomous vocals and even a little digital manipulation. Wow what brainfuck.

The guitars in this track nearly steal the show, but hot damn those screamy vocals are top notch and up there with Hiretsukan and Weak Wrists. That chunky breakdown and broken shrieks at the end are gonna turn some heads, holy sheeeat.

(2019) 4 - BLEAK RUGIADA "Circles" (from 'Bleak Rugiada')
The only non-"/" song, "Circles" is another brain blender that'll leave you speechless and possibly salivating with mouth agape. After a sick screamo build and some sweetly sung vocals (Poison The Well, anyone?), the closer immediately guzzles six cups of coffee and a whirlwind of righteous, technical, screamy hardcore ensues.
Posted by Dave Norman at 08:58