I have invested a lot of personal time and money into the following three releases which all came out in the last two days. I am so fucking stoked on Zegema Beach Records in 2017 and 2018, it's crazy. Please check out the releases thus far (René Descartes, Crowning, Nionde Plagan, The World That Summer, Under A Sky So Blue, The Ultimate Screamo Band, Lora, Majorel, Truman and Trachimbrod) as well as all of the unreal things to come (2x12" 8-way split, Jeromes Dream comp, Protest The Hero tapes of every LP, etc.) so I can keep trying to help more amazingly talented people whose passion inspires me to no end. 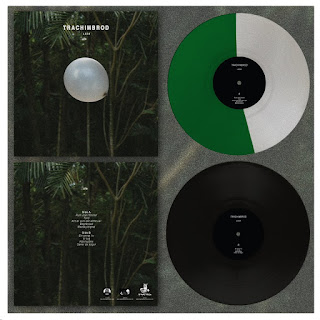 I'm unsure if it was TRACHIMBROD or Via Fondo that was my first Swedish love, but with Via Fondo collapsing it's good to know that these fine fellas are showing no signs of slowing down. The 'Leda' 12"LP was released yesterday on Zegema Beach Records, Dog Knights Productions and Through Love Records and thus far is without a doubt my album of the year. Seriously this thing is pretty much flawless. It opens with the super chill, catchy and screamy "Rum Utan Fönster" that even boasts a flute that works so well it's a little scary. I think I shall dub thee Elvish screamo. The next embed below is for "Tärd", which is actually titled "All är som det alltid var" but due to a mixup was switched. How I wish this was the single off of 'Leda', because it is fucking stellar and might end up being my favourite song of 2017. The opening of the track is pretty cool and sounds a lot like Lukas' (vocals) other poppier emo band I Love Your Lifestyle but at 50 seconds the guitar riffs begin and tear my world apart (in a good way). Honestly this part is one of the best things I've ever heard in my life, as for 45 seconds the guitars are spacey, uplifting and so catchy that they are laden with hooks dipped in a massive bucket of smaller, sharper hooks. The bass and drums compliment everything perfectly and the vocals help bridge the gap into the screamo genre. Basically, when this song comes on I stop whatever I'm doing and bob my head with my eyes closed from 0:50-2:48 and come pretty damn close to what one would probably label as peace. The final track I've stuck below is the shortest, heaviest and my second favourite song on 'Leda'. "Medskyldighet" opens with a basic, pounding drumbeat that is a wall of screaming and bass/drum driven musical catharsis at 25 seconds. By 1:16 it slows and takes on what I call the Swedish Twinkle with dispersed screams that is all very reminiscent of my musical Jesus - Via Fondo. If you're in North America grab a copy from my label ZBR here but if you're overseas be sure to support your local-ish Dog Knights (UK) and Through Love (GER), linked below. 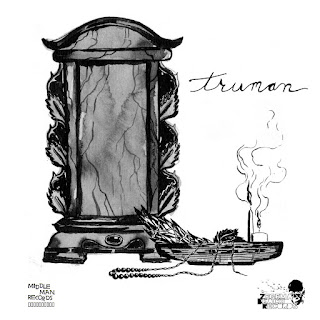 I've been a very avid follower of these three beautiful people for a few years now, as they submitted material to this blog back in 2013-2014. Progressively getting better and better, this new EP 'ma doi' is no exception. Taking the dark and chaotic elements from their previous 'Ikebana' EP and then expand on them to fill every space in the room, opener "these struggles only result in sharper misery" is the perfect example. Beginning slow and methodical, TRUMAN builds on sweet, smooth chords until 2:15 when the drumming and dual shrieking really picks up. By 3:43 the behemoth recedes and takes a bit of a slumber, sounding very much like City Of Caterpillar, but this approachable beast only lays dormant until 4:25 when the song goes apeshit. Holy moly what a closing. I've actually embedded "augmentation through removal" first below, as it was only released a few hours ago and is a prodigious, imposing and haunting experience. Clocking in at 7:13, the opening is deceptive as fuck, with a clean and beautifully timed layering of all three instruments until TRUMAN puts on their death masks and tear shit up. At two minutes, after the smoke settles, we are graced with a bass and viola duet that eventually absorbs all of the instruments into a mass of post-rock that isn't unlike The Pax Cecilia, Mogwai, Funeral Diner or Godspeed, You! Black Emperor. The melodies begin to rot and become sinister dopplegangers which topple the massive structure erected over the course of the EP in the final two minutes of this closing track.

"these struggles only result in sharper misery"
Bandcamp
Facebook 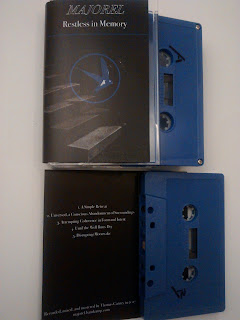 I got hooked up hard with this release, goddamn. Because I am friends with Jesse Mowery and also know the other members from Swamp Fest (among other things) this phenomenal debut cassette fell right into my lap and I can't be more stoked. This thing is fucking amazing. Mixing dreamy webs of haunting post-hardcore and an astounding number of shredding screamers, this four-piece might have EP of the year over here. I've posted "Unversed, a Conscious Abandonment of Surroundings", the second track from the EP, which is the shortest at 1:18. In that tiny little time span MAJOREL manages to rip through all of their vocalists, generally two or more at a time. The balance of highs and lows in that department is amazing, as Will's in particular are insanely shrieky and help give the band that Swan Of Tuonela touch. "A Simple Retreat" is my fucking jam. It premiered here less than a month ago and includes my favourite MAJOREL part, which is pretty much everything from 0:39-1:45. It starts with trippy ambient guitars and a lot of Will's screaming and isn't far from Welcome The Plague Year's sound. Dispersed throughout are mini breakdowns that ricochet back and forth with the softer elements to create a beautiful dynamic. This eventually leads to Jesse's gruffer screams and a heavier build to the final 20 seconds of awesomeness. We only made 70 copies of these so please grab one soon!

"Unversed, a Conscious Abandonment of Surroundings"

Order from:
Zegema Beach Records
Posted by Dave Norman at 05:23