For fans of: Since By Man, These Arms Are Snakes, Bleeding Kansas, Circle Takes The Square, Amber, Von Wolfe and The Jonbenét
Bandcamp / Facebook / Pre-Order

Hi there. This is the exclusive premiere for THE WORLD THAT SUMMER's second track from the Nionde Plågan split 10". The song is called "Heat Death Parties are the Bomb, Man" and is our shortest and sassiest song that we pretty much play every show. The official release date for this sexy piece of wax is March 17th so I will start shipping pre-orders tomorrow in order for people to have their copies before or by that date. The 10" houses three tracks by the band I scream for, THE WORLD THAT SUMMER, titled "What is Dead May Never Die" (Game of Thrones), "Heat Death Parties are the Bomb, Man" (idiocy breeds hate and death) and "Moth Volcano" (fuck religion) which vary across a few genres, although most of the sound lies in the post-hardcore/post-metal realm. The other side is Sweden's Nionde Plågan who play a beautiful mix of slower, sludgy post-hardcore and post-metal that extends over two tracks and both hover around the five-minute mark. They are going on tour in April with another amazing Swedish band called Trachimbrod who will be releasing their 2nd LP the same month on Zegema Beach Records, Through Love Records and Dog Knights Productions. Check out their facebook page for the details here. A full stream will go up March 16th on IDIOTEQ.


The current pre-order for this split 10" is available at: 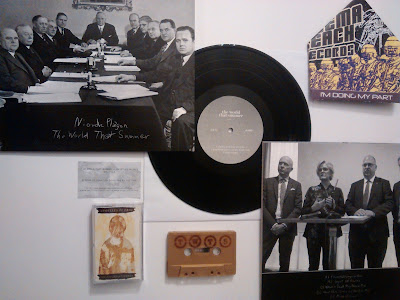