SEEYOUSPACECOWBOY
"Pep Talk from a Nihilist" 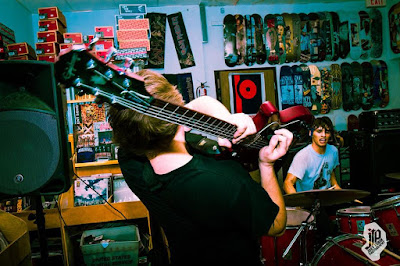 ffo: Heavy Heavy Low Low, Fear Before The March Of Flames, The Blood Brothers, Me And Him Call It Us, Hayworth, Letters To Catalonia, Black Nail and .gif from god

Amazing screamo influenced metalcore (or maybe it's the other way around?) is definitely on the rise with bands such as .gif from god, Letters To Catalonia and Black Nail. The new amalgamation of recently defunct René Descartes along with members of Letters To Catalonia, has led to a very confident and particularly sassy offspring from San Diego, California. Imagine the metalcore elements of Heavy Heavy Low Low, the multifaceted screaming of Fear Before The March Of Flames, the sinister sass of The Blood Brothers, and it's all blanketed by a profound love for the violence of Me And Him Call It Us and the quirkiness of Daughters. Well, that's SEEYOUSPACECOWBOY.

In 2016 the band released a four-song EP appropriately titled 'Demo' on cassette via Connie's label Structures//Agony and cd on the always reliable React With Protest Records. It was fantastic for a demo, opting for spazzy and sassy grind/metalcore complete with breakdowns, yelping and multiple, venomous screamers. This formula was revised and perfected, because the six songs on the upcoming 2017 7"EP 'Fashion Statements of the Socially Aware' are fucking ridiculous. RE - DICK - YOU - LUSS. Take a listen to the third song below. "Pep Talk from a Nihilist" begins with 20 seconds of those sassy/yelped vocals I keep mentioning along with awkward and jarring instrumentals that sink like a stone afterwards. The vocals switch to gutteral growls and then scathing screeching. By 42 seconds we are graced with a prodigious breakdown and screams that are so thick and piercing that they could penetrate a bullet proof vest. From around the one-minute mark to the end of the song, SEEYOUSPACECOWBOY switches to spoken word and what I can only describe as music that sounds like The Dillinger Escape Plan. A million thanks to the band for allowing OMSB to do this exclusive stream. Prepare yourself...


Connie was kind enough to send me the lyrics to "Pep Talk from a Nihilist" and they are as follows:

and you spit blood from across the room

just brace yourself and spit in tune
high stakes silence while their tounges loom
the wolf inside resumes,
wont see you soon

SEEYOUSPACECOWBOY will be releasing 'Fashion Statements of the Socially Aware' before the summer starts on 7" and will support its release on a mid-west/west summer tour.
Posted by Dave Norman at 17:30