***THE WORLD THAT SUMMER / APOSTLES OF ERIS split streaming*** 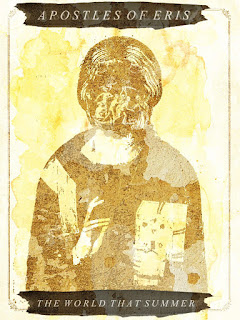 Back in December the band I do vocals for called THE WORLD THAT SUMMER recorded 7 songs. We only had time to do vocals for three of them so they became our side of the APOSTLES OF ERIS split cassette. These songs are definitely our softest (although there's screaming throughout) and showcase a style that was more prevalent in the first month or so of our conception. We have since moved to a much heavier and diverse sound that can be heard live or on our upcoming releases, a split 7" with Nionde Plagan and a 2x12" 8-band split, both being released later this year. We also plan on doing a 7" with two new songs that we still need to record. Our band is influenced primarily by screamo, hardcore and post-metal although each song generally hits a few different genres. Here is our exclusive premiere for "Swine Dialect Incantation" and you can jam/download the entire split here. There's also a live video of us playing this song at our first ever show right here.

In 2015 I went on tour with мятеж and we needed a bass player. I contacted Jesse Mowery because we met online and had many similar interests, especially when it came to screamo. We bonded like long, lost, separated kin and decided to do more stuff together in the future. When The World That Summer was formed Jesse asked if his solo project APOSTLES OF ERIS could do a split with us and we agreed right away. Jesse also asked if I wanted to put some vocals on one of his tracks which I thought was a cool idea because I thoroughly enjoyed screaming back and for with him in мятеж. He sent me a track to which I wrote lyrics to about religion being the worst invention (along with money) and sent it back to him. He wrote his own part and voila, here is the exclusive premiere of "Putting Faith Into Fantasy" which is a killer track with amazing instrumentals that remind me of a spazzier Daitro. As stated above the entire split can be streamed and downloaded here.


APOSTLES OF ERIS - "Putting Faith Into Fantasy"
Posted by Dave Norman at 13:20