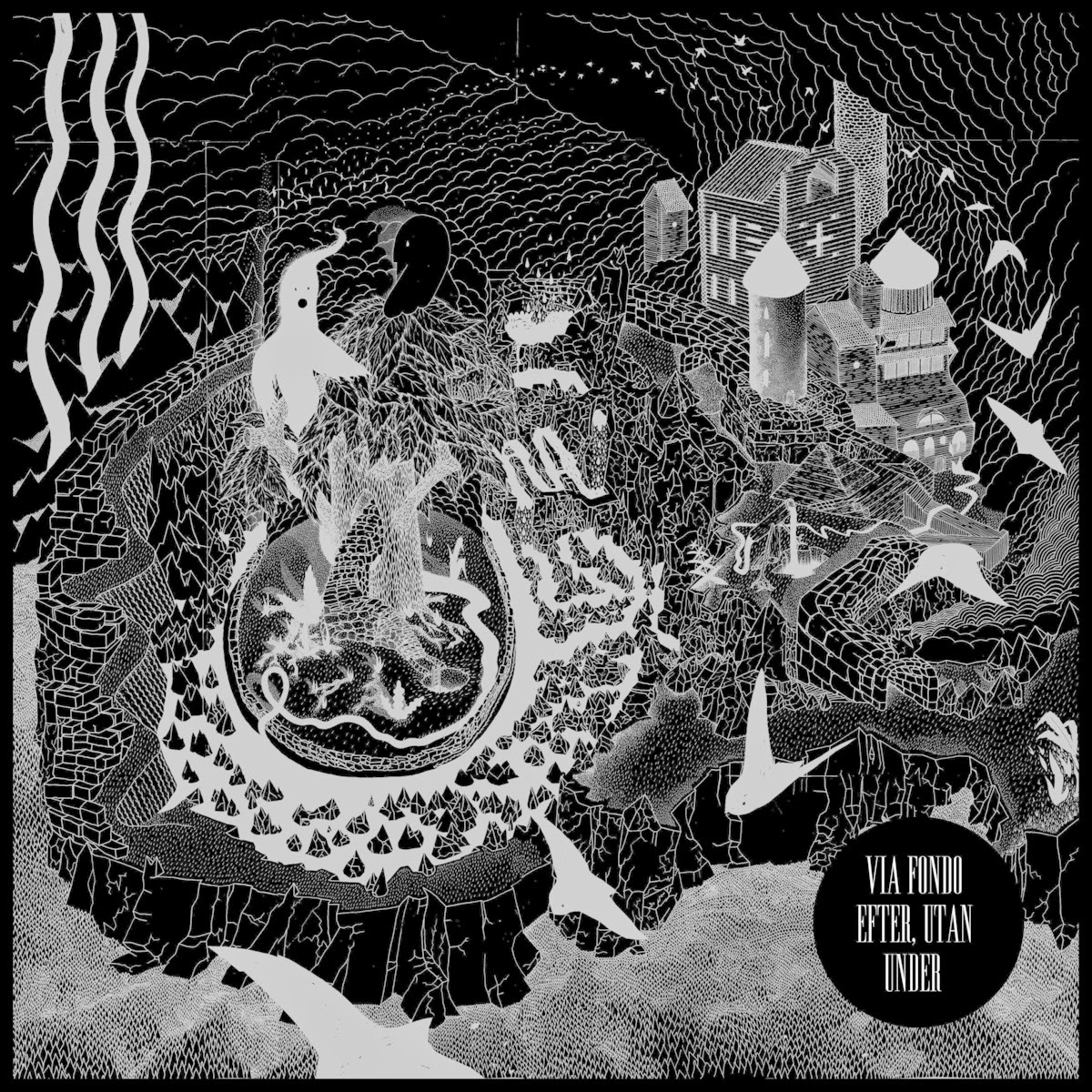 VIA FONDO's new 12"LP 'Efter, Utan Under' was released as an online stream today on IdiotEQ.com along with an exclusive interview. Open that bad boy here and listen to the songs while reading this review, or just skip the review and read the interview. Regardless, it's linked here. I will be posting a VIA FONDO bundle on January 16th including the 'Fast' 12"EP along with the 'Efter, Utan Under' 12"LP at a discounted price. If you are just looking for 'Fast' you can order it here, and hurry because stock on that EP is running really low.

1) "Avstängd" begins with a twinkly and gruff, screamy intro before delving into a wailing, stop-start wallop of classic VIA FONDO riffing with textured, layered guitars. At the halfway point the song takes a bit of a breather with dual vocals doing a brief foray into a yelling/spoken word style before being washed away by some driving drums and solid, high-end speed strumming.

2) "Var inte rädd, min vän" is probably the catchiest and most accessible song on the album as it gradually builds on the two guitar riffs until just before the 1-minute mark when they throw in the harder part of the song. At 1:30 they revert back to the slower stuff and let it hover over the spoken lyrics as it builds to the close with the closest thing to clean singing the band has ever done. Fantastic song which was the first single from the album.

3) "Jag Vill Ändå Vakna" is the lone wolf of this album, being sung by a different vocalist. The song itself is typical VIA FONDO, mixing the chaotic with the spacey and entrancing - but the length of the "song" is only one minute and then it careens off to ambient echo looping. This atmospheric outro is what Chariot Of Black Moth used as the trailer for this new LP, which you can watch in all its glory below.

4) "Januari" is the perfect song to use to push my VIA FONDO = the evolved La Quiete argument. La Quiete has had a solid, individual grip on the screamo scene for almost the past decade after dropping the insanely perfect 'La Fine Non É La Fin'. One of the cornerstones of that album is the fourth track "Ciò Che Non Siamo, Ciò Che Non Vogliamo" aka "What we are not, what we don't want". It is a great song that repeats a very catchy riff for the last half and is by far the longest on the record because of such. VIA FONDO do pretty much the same thing, opening with two bombastic syllables hurled forth from vocalist/guitarist Karl that begins the aggressive half of the song which blasts through for about 3 minutes before swirling and echoing guitar jumps take over and slowly streak across the audio skyline, it's so surreal and soothing at the same instant. Before pressing play for this song I always yell out, "Bohp, bohp!" and then proceed to lose my shit...not literally, or I'd be on the toilet all day.

5) "Vita Staket" is my favourite song on the album. It's just fucking incredible. The wavering, spacey guitars with hectic drumming and screaming is the intro. The song then shifts into a short emo-ish section before landing on your goddamned life with one of the most well-written, smoothest and catchy twinkly, interlaced guitar work from Karl and Simon that I've probably ever heard, and that's taking "Rovaniemi" into consideration. The song builds from there, reaching a crescendo at 2:19, which features a poppy and repetitious slide mixed with that signature chaotic drumming from Gustav. Just fucking wow.

6) Next up is another phenomenal song entitled "Isolerat Kall" which begins with interchanging vocals and a pretty, clean intro not unlike "Var inte rädd, min vän". This lays the foundation for the remainder of the song as it bobs and weaves through desolate caverns - or so my mind pictures. At 1:22 we are graced with a pretty sweet breakdown followed by another, bigger breakdown before fading into the outro.

7) "Mörkret" is one of the records' longer songs, clocking in at over four minutes. In particular, this reminds me of the band's earlier work, especially "Not Yet" from the 'Fast' EP. The song really feels like one continuous, flowing piece of art and is probably the most well-rounded and structured song on the record with builds and drops, all sequenced within the framework of limits set early on in the track.

8) "Strategi" was one of the two songs previously released, but I'll still touch on it because it's fucking amazing and probably the heaviest track on here. At 2:19 it flies through some heavy La Quiete/Raein moments before settling down at the 35-second mark with some heavy, slow and drowning instrumentals that build to the album's climax and subsequent denoument. Goddamn Gustav, you are one crazy drummer.

And that's that. I've been talking about this record as being the best screamo album since La Quiete's 2006 masterpiece 'La Fine Non è la Fine', and after six months of jamming it daily I can wholeheartedly stand behind that argument. If you like screamo or screamy hardcore or emo or twinkle and you aren't all over this, I have no idea what you are doing with your life ;)

Stream the 'Efter, Utan Under' 12"LP and read the interview at IdiotEQ.com

Order the 12" from Zegema Beach Records

Order the 12" from Through Love Records

Read the old OMSB Via Fondo band review when 'Fast' was released
Posted by Dave Norman at 17:07