Welllllll fuck. It's bittersweet, but here is the exclusive premiere of the мятеж/KELUT split 12"LP along with the news that our European мятеж has officially been cancelled. In a nutshell, our drummer's passport was stolen the day of his flight and our guitarist and head honcho was also unable to get to Europe. Mike (bass) and myself (vocals) can't really do the tour by ourselves so we've had to pack it in and accept defeat. I'm very sorry to those who booked or helped book shows for us, especially considering that some of said shows have now fallen through. Everyone in Croatia was amazing in every way and we also caught a sick show with Ostraca, Komarov and Adrestia. As of this post I am now in Munich, Germany with my family. It's fucking gorgeous here. We just ate vegan donairs with vegan baklava and cinnamon cream sauce for Lisa's birthday. At least things are on the up and up now. Okay then...let's begin.

"Intro"is just that, a mild and dreamy afternoon floating down a river on your back. "Van Llewyn and Burke, Carter J. - Welcome to 2017 (you pieces of shit)" was initially released on Zampler #5 (with demo vocals) way back in 2015 and has always been one of my favourite songs for a myriad of reasons, the most obvious (perhaps) is because the entire thing, including audio samples, are about the movie Aliens. The song was apparently 4 bits of songs thrown together with different audio samples, but as I was unaware of this when writing the lyrics I just thought it was one killer track. I removed the initial samples and included the sound bytes from Aliens in order to put a spotlight on the movie's incredible depiction of selfishness, greed and lack of empathy for others via government and corporate entities. Jesse Mowery (our touring buddy and third head) lays down some scathing vocals from 1:26 onwards with "all the dreams we've ever seen".

"Interlude" is track that houses Chris' only vocals on any release thus far, so I can't say exactly what it's about. "The Dark Ages 2.0 (Copyright 2017 USA)" was first written as an instrumental track for a tape comp that didn't end up happening, so I decided to throw down some vocals for it. It's pretty mellow for a мятеж song and is about my pessimistic attitude regarding the future of the USA before Trump was even considered a presidential candidate and my subsequent realization that said pessimism was actually a little too optimistic. My favourite lyrics on this one are, "What are we to do when reason won't put a fight? Turn off the lights and disintegrate into the night". The finale is "Straight the Fuck Down", which is probably one of our best songs to date. The opening 30 seconds or so is your typical мятеж screamo/powerviolence that recedes quickly into a single, hypnotic guitar riff that balances out the remainder of the song. It also includes one of my favourite samples from Copland as well as the final movement of the very first (and only, as I was listening to a hell of a lot of Carlos Cipa at the time) piano song that I ever wrote. That piano clip is actually myself and my amazing wife Lisa playing together. 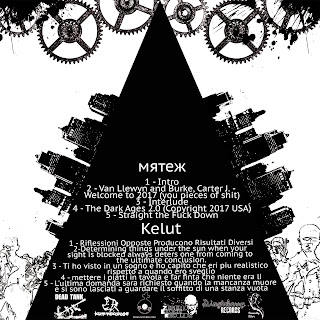 KELUT is, for lack of a more succinct synopsis, the next step for the majority of members from Yusuke. Pretty much gone are the pretty, noodly and more Saetia sounding sections, as the band goes apeshit here with five tracks of mind-numbing and ear-splitting screamy, dark hardcore. Tracks 1 and 2 were previously released on Zamplers and the KELUT bandcamp page, with the final 3 songs being premiered right now. Prepare yourself for multiple vocalists taking almost constant shots at you, with raging instrumentals and some fucking sick sweeps. Ryan, the drummer from Yusuke, said farewell to his drum kit in order to just scream maniacally along with the former Yusuke vocalist Tony, thereby giving the band some awesome dual screamers. The always intricate and amazing Tyler on guitar recently moved away, so I am unsure if the band will continue, but I am beyond stoked to share this 12" split with them.

The 12" comes in screenprinted jackets by Nevin from IFB and artwork by the extremely talented Connie Sgarbossa of SeeYouSpaceCowboy in a polybag with two lyric inserts. The vinyl sleeves are black, as is the 12" vinyl, with handstamped centre labels by yours truly. The records are sitting at a house back in Canada and will ship out as soon as I return for a July 20th release date. All Zegema Beach Records pre-orders come with a free 12" split with Yusuke and Lori AND a free Zampler compilation cd! Order from all the labels below.