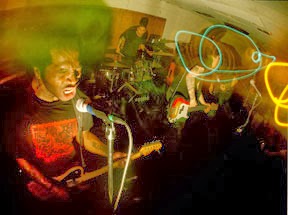 If I'm being honest, I think YAPHET KOTTO attained god-like status among screamo enthusiasts. I understand the initial appeal and the originality, but I would place other bands much higher on my list.

Regardless of my personal bias, YAPHET KOTTO are considered one of the most influential screamo bands that pushed the Midwestern post-hardcore sound but gave it a flare that has yet to be repeated. They existed for a full decade before disbanding, and in that time their sound changed very little. They found a formula, stuck with it, honed it and by the time 'We Bury Our Dead Alive' was released they had it down to an art. Pretty much all of their recorded output is what I would consider to be "passionate hardcore". The band was also fiercely political and generally included writings with their records. Man, most bands used to do that. Those were the days.

The sound. You know what, I don't even want to try and pigeon hole this any more than I already have. I'll lay out the basics; 2 guitarists playing some soft and some hard parts, bass and drums that lead a lot of the instrumental tracks and 2 vocalists - one high-pitched singer and one gruff yeller. Billy-goat gruff. What? Sorry.

I have included what I think is all of their discography - so get on that.

Some songs to check out are "Chime the Night" and "The Constant Ringing" because they are epic, "Tracing" because it's the band's hardest song, "Circumstantial Evidence" and "According to History" are classic YAPHET KOTTO, and finally "The Lurker" because it epitomizes the band in the best possible way.