This amazing post was written by my wife - hence that fantastic grammar, lack of errors and general understability. Crap, that's apparently not even a word.

“It has been a number of years since I began excavating the ruins of Candar with a group of my colleagues...

I believe I have made a significant find in the Candarian Ruins. A volume of Ancient Sumarian burial practices and funerary incantations.

It is entitled, ‘Morturom Demonto’ – roughly translated, ‘Book of the Dead’.

The book is bound in human flesh and inked in human blood. It deals with demons and demon resurrection and those forces which roam the forest and dark bowers of man’s domain.

The first few pages warn that these enduring creatures may lie dormant but are never truly dead. They may be recalled to active life through the incantations presented in this book. It is through recitation of these passages that the demons are given license to possess the living.”
~Professor Knowby

'Evil Dead', 'Evil Dead 2' and 'The Army of Darkness' are all modern B-movie masterpieces. They combine the comedic brilliance of Bruce Campbell, buckets of blood, demonic possession, chainsaws and the odd time portal. These movies have spawned dozens of fan sites, remakes and blogs, plus one of the greatest musicals ever created. That’s right, I said musical. As in, ‘Phantom of the Opera’ and ‘Les Miserables’, but with the singing undead.

This promo ad pretty much sums it up:

A group of Toronto writers staged the first production of EVIL DEAD: The Musical back in 2003. It moved to the Montreal Just for Laughs festival in 2004 then off-Broadway from 2006 to 2007. From there (luckily for us) it came back to the Great White North and set up camp for a Toronto run that was extended five times its original length.

Dave and I first went to the show in 2007. It played at the Diesel Playhouse, a small theater with cabaret seating for maybe 100 people. I bought tickets online, and the first two rows were called the ‘splatter zone’...I wasn’t sure what they’d be throwing at us so I decided to sit a row or two behind it just in case.

There was a merch booth at the building entrance featuring the soundtrack and t-shirts with 'WHAT THE F*CK WAS THAT?' in giant white letters across the front. I have such a vivid memory of these two things.  I remember thinking “That shirt is ridiculous”, and “Who would buy the soundtrack to this musical?” If only I had known...

Well, the show began and my mind was blown before the first song finished. It was campy, hilarious, and completely over-the-top. Those in the ‘splatter zone’ were treated to blood spurting from various characters’ hacked limbs and Candarian demon mouths. Cartoonish, demonic stuffed animals serenaded us from the walls of the set. The play’s director came out dressed as a headless torso and chased the chainsaw-wielding Ash around the stage, all the while spewing blood from his stump of a neck.

Oh, and they were singing the whole time. Let’s not forget that. The songs were amazing and catchy as hell. I revisit the soundtrack every once in a while and am always reminded of how fantastic every song is.  A few of my favourites are:

'What the F*ck Was That?' (yes, I ate my words BIG TIME on that one)
'Good Old Reliable Jake'
'I’m Not a Killer'
'All the Men in My Life Keep Getting Killed by Candarian Demons'
'It’s Time'

Dave and I have become a little obsessed with Evil Dead: The Musical since that first show. We saw it three additional times, including a very special 300th show on June 26, 2008. We’ve collected promotional posters, foam chainsaws and axes, playbills and promo materials. You name it, we have it. Everything imaginable, except that damn 'What the F*ck Was That?' t-shirt. I look at it as a little dig from the universe for doubting the awesomeness of a musical based on Evil Dead. 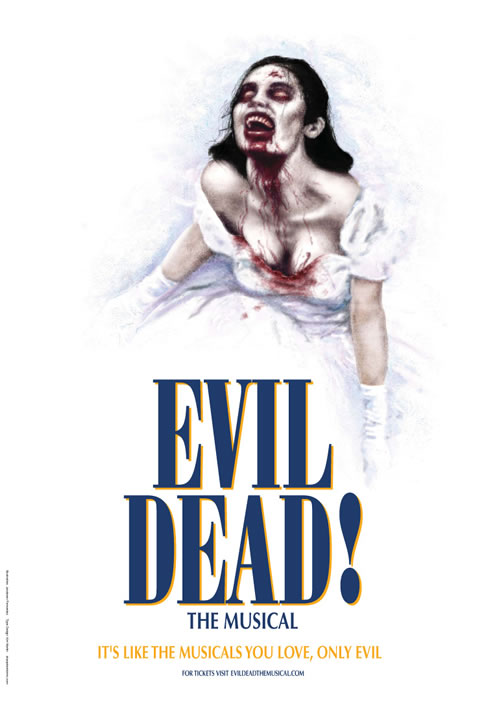 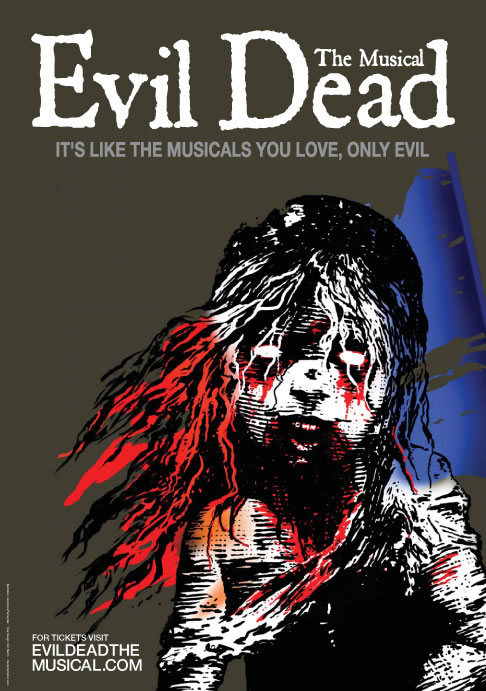 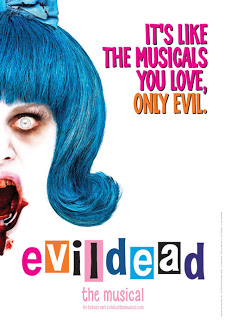 Evil Dead: The Musical continues to tour around the U.S. If it’s playing in your city and you are even remotely interested in the original Evil Dead movies, Bruce Campbell, gratuitous violence and/or screwball comedy musicals, get thee to the theater!

I would pay *a lot* of money to see this show again, and am currently plotting ways to coordinate a road-trip down to Detroit when it opens in October 2013. 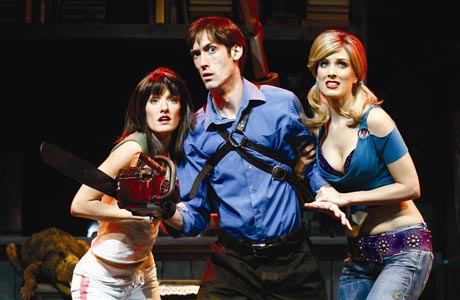