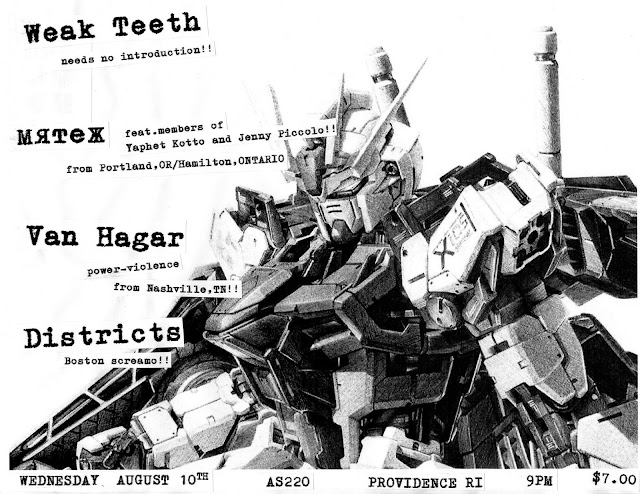 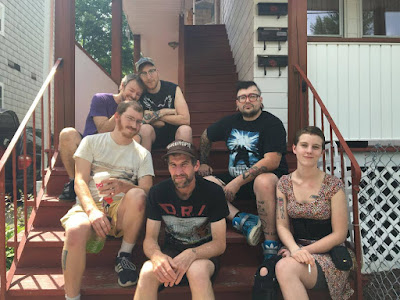 DISTRICTS
I was already online friends with both Jake Letizia and Mike Van Buren from DISTRICTS. I'd heard the band's older material (pre-Mike) and liked it but wasn't blown away. What I saw this night completely changed my perception of the band. Guess what? They are fucking sick. I'm feeling quite feverish and gagging just typing this. The melodic and dreamy emo turns cathartic screamo throughout each song and the band played with hella passion and gusto, including Jake literally snapping his guitar strap and having to sit down on a chair for his guitar/vocal parts (hence why song 4 is in two parts, I had to find that guy a chair). They have recorded some new material and will be releasing it relatively soon, I do believe, so hold on to your goddamn butts.

Woooooo boy, our friends in Van Hägar got me pumped as fuck to play next. After nearly blowing out her knee the night prior, Jazzi came back like nothing happened and actually went even more ballistic this time around. The sound at this place was awesome and thankfully I caught my favourite song on film. Be sure to check out the middle of the song with multiple vocalists and a really cool switchover. Powerviolence meets a six-string bass, that is Van Hägar. P.S. Nicky is a machine.
1
Links to songs *2* / *3*
Bandcamp
Facebook

мятеж
Maybe it had something to do with the fact that I had just met Mike Van Buren (of whom I'm a huge fan) who helped get us the show, plays in Districts as well as Det Ar Darfor Vi Bygger Stader and defunct outfits Ken Burns, The Last Forty Seconds and Who Goes There?, but this was an all around phenomenal experience in every way. The set felt really good, the bands were all amazing and the turnout was the best of any show we played. I also got to meet the mind behind Tor Johnson Records so that was pretty damn amazing. Here's a video of our first song, which was also the second song we ever wrote as a band and it's about humankind's inner struggle of reconciling technology with nature.
"Power Humvee vs. Cave Dweller"
Bandcamp
Facebook

WEAK TEETH
While we were setting up the merch table, a very familiar looking fellow made a joke to Mike and then stopped, looked at me and said, "I think I know you.". I said the same and he asked if I lived in Toronto and I said no, Hamilton. He immediately smiled and said, "Holy shit you put on the Bloodpheasant show! I was in Bloodpheasant!" and we hugged and reminisced. I also have the final Bloodpheasant LP that hasn't been released yet and it's amazing. One more side note, a member of Weak Teeth bought the .gif from god tape so you know he likes great music ;) So...Weak Teeth. The band plays a hyperactive, heavy and driving hardcore. The blistering parts are offset by beautifully layered, soaring guitars and the thick, screamy vocals are occasionally spread across all three ax wielders. The aforementioned Chris can be found swinging around in every single video from pure passion, which is awesome. The superb drumming is also worth noting, as is the turnout that these four musicians brought out, which was the most out of any show. Fans of Joliette, Litany For The Whale and Lyed should take note.
1
Link to song *2* / *3* / *4* / *5*
Bandcamp
Facebook
Posted by Dave Norman at 16:47