***NOT FOR YOU w/Sarin, La Luna, The World That Summer & In The Name Of Havoc show review*** 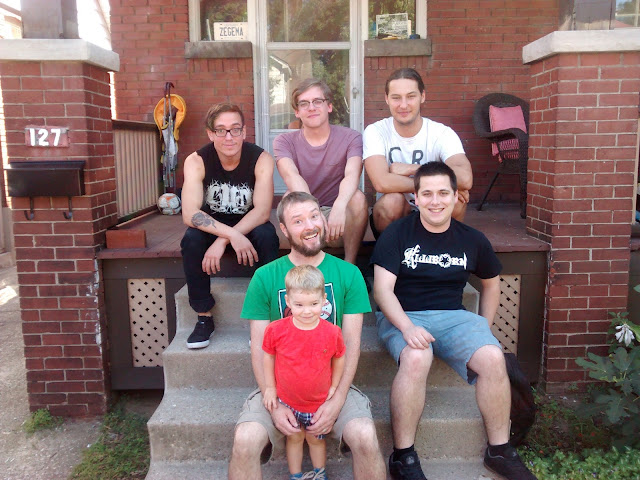 On September 3rd, 2016 I held a show at Doors: Taco Joint & Metal Bar and it was good. Real good. Nnamdi from Itto asked if I could help out a friend of his. So I did. I then found out that the bassist Mike is the same Mike who drums for Nouveau and that made me extra stoked for the show. I was able to convince La Luna from Toronto to play and Sarin hopped on because they were fans of La Luna. My band was the closer and a few weeks before the show In The Name Of Havoc was added as a fifth band to this Saturday bill as they were passing through from Montreal on their tour and needed a show. The turnout was okay, but as usual all the bands slayed and I filmed it for your viewing pleasure. Extra thanks to Paul for driving La Luna and happy birthday to our boy Mike Errington! Also, additional thanks to Jesse, Mike, Mike and Emily for filming while I was either tending to the door or screaming into the mic. <3

IN THE NAME OF HAVOC
Montreal's ITNOH is heavily inspired by Every Time I Die and it definitely shows. The band is able to tie in both catchier, melodic moments as well as bassy, breakdown laden hardcore. I also got vibes of Protest The Hero, Vaux and Shai Hulud during their set. Malcom has a great singing voice and Orin jumps around like a madman, making this a very enjoyable introduction to the band. They're also super nice guys so The World That Summer will be playing with them again in Montreal on September 22nd (event info here)


LA LUNA
I'd been trying to get LA LUNA to Hamilton for a few months so I was stoked to finally able to see it happen. The band kicked major ass yet again with new drummer Keon and a three-mic setup that gave them a much fuller sound. Their mixture of harsh screamo and melodic emo moments has been discussed within most screamo circles I know and everyone loves this band. Be sure not to sleep on their 2016 release 'Always Already' on their bandcamp page. Fans of Kidcrash, Loma Prieta, Lord Snow and I Hate Sex take note. The video posted below is 8 minutes covering numerous songs and filmed by Jesse Stratton. Thanks, buddy!
Bandcamp
Facebook

SARIN
SARIN fucking laid waste to Hamilton. Goddamn. The Toronto post-hardcore/post-metal band recently opened for Poison The Well and that brought a few folks out to the show who were surely not disappointed as the five-piece played old favourites amongst unreleased numbers and went apeshit whilst doing it. It looks like Zegema Beach Records will be helping release their debut LP, as I've just finished jamming the pre-mastered versions and I'm fucking floored. Isis, Neurosis, Sunn))) and Old Man Gloom fans will be smitten. Smitten, I say! Anyways, they were crushing. Check out the always entertaining "As Well As the Body" which has guitarist/vocalist David contorting spastically yet rhythmically and a new jam below.
Bandcamp
Facebook
Additional live video of a new song from the show (here)

NOT FOR YOU
On tour from Chicago, the impossible to place (genre-wise speaking) NOT FOR YOU played most of their new album 'Flood'. The three piece comes off quite nicely in a small venue such as this, with the bouncy-yet-dark instrumentals melting into Lindsey's crooning and occasional cackling. I think the highlight for me was when they dropped the guitar altogether and had Lindsey shrieking over Mike's super catchy bass and Paul's rolling rhythms, which I have posted below. You can also watch the third track called "O" from their new album as the additional live video linked here.
Bandcamp
Facebook
Additional live video from the show (here) 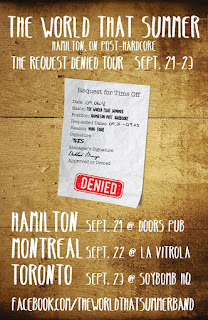 The band I scream for closed the night with a 25-minute sweatfest. Judging by this video we seemed to move around more than usual and were pretty into the whole thing. We played six songs of varying heaviness that could generally be lumped into the post-hardcore pile but we definitely bring in other influences such as post-metal, screamo and I might even say sassy rock. Our good friend Mike had his birthday but that didn't stop him and Emily from filming our entire set, with a few killer shots, I might add. I overheard someone say our new stuff was reminiscent of Old Man Gloom and I almost fainted. I've cut up our video so you can watch the last two that we played. The embedded video is of "Faction - Religion" and has me busting out of an imaginary "door" between Ollie and Mike, sounds pretty dang good, has some cool, low closeups up with the band and has a weird shot of me spent on the floor by the end. The linked song/video is for "Heat Death Parties are the Bomb Man" which is our sassier, dancier song that still packs a wallop.
Bandcamp
Facebook
Additional live video of a new song from the show (here)
Posted by Dave Norman at 13:57