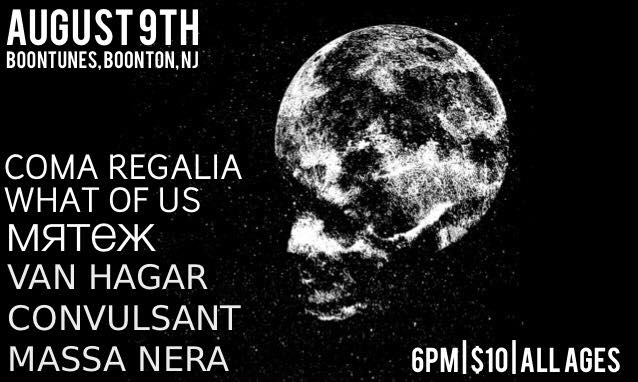 MASA NERRA
This opening act blew everyone away. Despite some technical difficulties on guitar, the band powered through about four songs of passionate, screamy emo/hardcore with a lot of softer passages. Bright Calm Blue, Youth Novel, Shizune and Lonely Animals come to mind quickly as decent enough comparisons. The band recently recorded some songs which should be up soon, and I'm super excited!

This was probably the best set I saw during our three day tour. Neo-Capacities band WHAT OF US has members from so many amazing bands I'm not even going to name one...except that I kinda sorta already did. Anyways, the band plays pulverizing, fast, raw and relentless screamy hardcore on the much heavier side, with little-to-no "pretty" moments. I captured the entire set as one 20-minute video so sit back and enjoy getting drop kicked in the face.
Full Set

COMA REGALIA
Shawn and Brad pummeled through a quick set that sounded really dang good. They played all newer material save the last song from their Capacities split 7" during which Shawn picked up a guitar mid-song. The first of the four videos that I captured is nice and far back and has the best sound. Afterwards I moved in real close and got some great shots but you can't hear the vocals nearly as well. Regardless of that, the band sounds better and better every time I see them and the new material they have been releasing is absolutely stellar. Be sure to check out the band as well as Shawn's epic US screamo label Middle Man Records aka the best in the game.
1
Links to songs *2* / *3* / *4*
Bandcamp
Facebook

VAN HÄGAR
Our partners in crime on this tour, Van Hägar, set up next and rolled through about 15 minutes like it was nothing. Jazzi, Jesse and Nicky play bass heavy (6-strings, no less), cathartic powerviolence. Jazzi really steals the show with her constant movement, interactive stance with the audience while screaming and her words between songs. Watch the videos to see for yourself, but hot damn that's some intense shit. Sharing the "stage" with them and chilling together was awesome. A million thank yous to Jazzi, Jesse and Nicky <3<3<3
1
Links to songs *2* / *3* / *4*
Bandcamp
Facebook

мятеж
мятеж, the internet project turned touring "band", went our second tour in the last two years, this time based around the second Swamp Fest that was held in Richmond on August 12th-14th, 2016. After two days of iffy practices we played this set and it was okay. Watching the videos from the next two shows is a world of difference so I've just got one song of ours here. This is actually the third song we ever wrote (the first was never released, the second was "Power Humvee vs. Cave Dweller") and is about my parallel journey with a house plant that nearly died and came back to life, just like me when I quit drinking five years ago. Last year People's Temple Project lent us their drummer Eric and this year Van Hägar did the same with Nicky. Thanks so much Nicky, you kicked ass!!!
"That Plant Gets Me On a Deeply Personal Level"
Bandcamp
Facebook

CONVULSANT
Playing a very imposing mixture of punk, thrash, metal and grind, these guys were heavy enough to make me a little scared. Anyone who likes violent, screechy thrash metal should get a kick out of this.
1
Link to song *2*
Bandcamp
Facebook
Posted by Dave Norman at 17:00