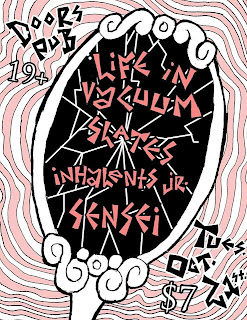 On October 21st I helped organize the 5th Zegema Beach show with, at this point, "self-appointed" buddies LIFE IN VACUUM. They granted my wish and played a new song, possibly titled "New Blood" which was unbelievable and can be viewed in the link here to all 15 videos (about 20 songs) or directly on youtube here. The bartender from downstairs came up to find out about the band's final two songs because he thought they were fantastic (one was the new song) and ended up grabbing their new and phenomenal album '5'. Two of the three members of LIFE IN VACUUM are also in Congratulations, who are playing their cassette release show (aka ZBR show #7) along with Nous Etions (who dropped a new 12" on ZBR here) and Terry Green (live show reviewed here), with two more bands to be announced - hopefully Coke Jaw, for sure. The facebook link for that is here.


I hadn't seen the other three bands but had listened online and was excited to see 75% new bands along with an old favourite. Those three did not disappoint, with SENSEI dropping some really loud and fuzzy shoegaze rock with a really encapsulating sound. Imagine Hum with faster, louder music and more confident/expressive vocals. I immediately tried to nab them to play the ZBR mini-fest but schedules conflicted. Nonetheless I really hope to see more of this band.

SLATES played an infectious power-pop/punk/post-hardcore/rock thing from Winnipeg. Imagine The Weakerthans mixed with the clean-era Hot Water Music ('Caution' and 'A Flight and a Crash') come to mind. I was thoroughly impressed and a friend of mine who attended the show was definitely losing his shit while they were playing and he'd never even heard the band before. I couldn't help but bob along with some leg shifts and whatnot, although the video I've posted has the camera sitting on the fireplace ledge. Yes, The Doors Pub venue rules.

GET OFF THE COP closed the night, although at the time they were (not) Inhalents jr. or The Inhalants. It was actually quite humourous as people kept referring to them as Not The Inhalants, including the band members upon opening their set. They played an interesting mix of spazzed out and droning guitars (happening simultaneously, mind you), bass dripping with ooze and vocals that went from muttering to snarky screaming. Imagine Iggy Pop and the Stooges but more abrasive.

Be sure to check out the next show and post that will actually be November 15th's Zegema Beach Records mini-fest happening at Club Absinthe in Hamilton at 5pm. So. Fucking. PUMPED!!! Facebook dealy here.
Posted by Dave Norman at 21:18