May 30th - AMBER exclusive interview with these post-hardcore juggernauts!

I read last year on my favourite (now defunct) blog, Elementary Revolt, about a band that meshes together the sounds of Isis and The Ocean with some great Mares-of-Thrace-style female vocals - you know, the screaming that is somehow able to be piercing and bellowing simultaneously. Needless to say I was excited to hear it. That self-titled EP was decent without being mind-blowing. Last month I nabbed a copy of their new EP, 'Lovesaken'. 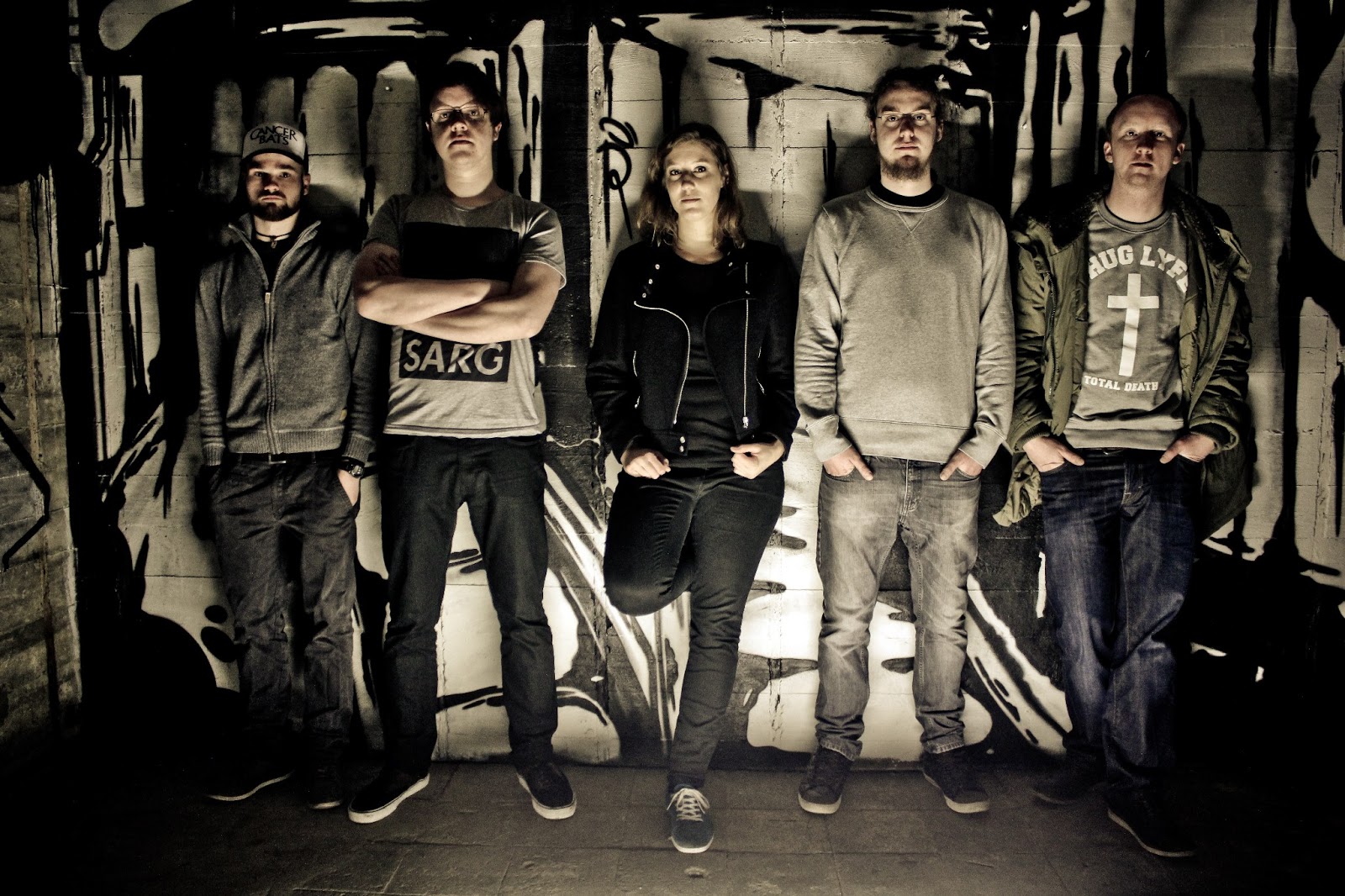 AMBER, from Germany, are in part influenced by Cult of Luna, Isis, The Ocean, and Neurosis and it definitely shows. I would also liken them to Back When and Pelican for their spacey/chugggg riffing (with four goddamn "g"s) and Aussitot Mort in terms of how it all ties together. The new 5 song, 30+ mintue album, 'Lovesaken' builds on their initial EP - weaving the songs together in a much thicker sound that trods along and builds for several minutes before exploding. The new 12", in particular, broods a very dark and ominous style of post-hardcore that dabbles in quiet pretty parts but still manages to hold on to that desperate and haunting sound that drenches the music and the band's style in general. Epic stuff. Anyone who is even remotely interested in the aforementioned bands should eat this up.

Considering that this band is still in its infancy, I can barely try to comprehend what they will sound like in a few years. For shit's sake, the first track titled 'Cold Hands and Warm Heart' off of their debut EP was one of the best songs I heard during the entire year of 2012, and all I do is listen to music - so that's saying something. A future full length will definitely be in my most anticipated releases of the year.

I recently had the pleasure of communicating with Jakob, the drummer for AMBER who answered some questions and gave us some insight into the beautiful beast that is their band.

Describe yourself and your band.
Hey my name is Jakob and I am the drummer and one of the songwriters in Amber! We are basically 5 people from Marburg/Gießen Germany who play post-rock/post-metal/post-hardcore/post-whatever style music. If you are into bands like Isis, Neurosis, Cult Of Luna or Pelican, you would probably enjoy our music as well ;) We released our first EP a year ago and just now released another 5-song record on vinyl. We also just finished our first tour and are looking to play more shows and record more music soon.

What can you tell us about the band members?
There is really not much to tell, except that we are all really ordinary people with a really special life-and-time-consuming hobby ;)


How did you all meet? How did you get involved in the band together?
The band originally started as my homerecording project. I had written most of the songs in 2008/2009 but had never really showed them anyone until I auditioned as a guitarist in Anna’s former band. She really liked the songs, and we decided to try to get these songs recorded and performed live at some point. It wasn’t until we met again later in 2011 that we started to make actual plans for that. I knew Tobias, the bassist, from a former band we played in, and then just asked my cousin Christian to step in as lead-guitarist. We then tried out different second-guitarists before Dennis stepped in to make Amber complete.

Can you describe any of your personal (or band) conflicts?
The biggest conflict we all have is probably to make jobs and the band work. We all work/study so our free time is often more limited than we would like it to be. It is really hard work sometimes to make it possible to play the amount of shows we do, but it somehow works out most of the time.

How has being in Amber changed you?
I don’t think Amber has changed us. Maybe to be more patient with each other sometimes, but as I said, we pretty much still do what we want ;)

Do you have any tips for people trying to start bands - or do anything else creative?
I guess it is a bit cliché, but the main thing would be: don’t give up! It is really hard, especially in the beginning, to get the thing rolling. You face so many obstacles, for example when trying to book shows, but you just have to push through.

Can you tell us about Germany and touring in other countries?
Since we've only just left Germany for 3 shows so far, I cannot really say anything about the conditions there. I have talked to a lot of bands from other countries, though, who come to Germany on tour and are overwhelmed by the hospitality. It seems that it is not as common as it is in Germany for bands to get paid and fed at shows, which makes me appreciate every show here even more.

What are your thoughts on the current state of the world?
It will probably all go to shit really soon!

If you had to slap a genre label on Amber so potential new listeners could get a good idea of your sound without hearing you, what would you label yourselves as?
The term I mostly go with would be “post-hardcore”, even though I do not believe that this fully sums up the style of music we play.

Can you discuss your thoughts and opinions regarding genre classifications of music? Are they necessary?
I don’t think they are really necessary, but they help when browsing through bands you have never heard of before. But you shouldn´t judge a book by its cover.

Who were your primary influences when you started playing music and who are they now?
Before I started this band I wasn’t much into this genre, and therefore only knew a couple of big bands. Neurosis, Amenra and The Ocean come to mind. Playing shows over the last year has introduced me to so many new bands which, of course, influences our songwriting a bit. I think by playing and being part of the scene you begin to understand your own music better in general.

What does the rest of 2013 hold for your band?
As I said in the beginning, we are going to release more music and play more tours soon. We are currently planning our next studio dates and trying to figure out what, how and when we want to put out another record. It is all still just ideas, but there will be new stuff coming, so stay tuned.


What is your:
most cherished physical record?

music
Anything you enjoy, do not stick to one genre!


books?
Bill Bryson - a short history of nearly everything


Is there anything else you would like to recommend?

(thanks for the plug, Jakob!)


Is there anything else that you would like to say? Anything on a topic of your choice would be awesome. Feel free to rant, make peace or pose a question.


It has been a great year so far! We have met a lot of awesome people and bands and we hope this will continue for a long time! Thanks for the love and support everyone! And thanks for the interview.

AMBER has some upcoming shows: