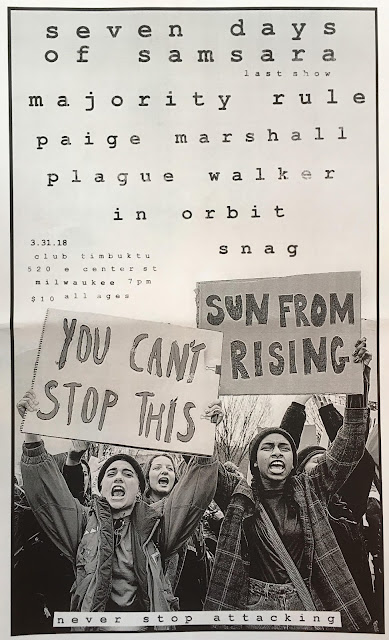 In an earlier post about the band Robots Don't Cry I mentioned I had gone on a tour in the winter of 1998 into 1999. That very same tour brought me to Milwaukee, Wisconsin for the first time in my life. It's extremely cold climate and tundra like atmosphere reminded me of Hoth from Empire Strikes Back.

We loaded into the attic of an old house and soon the show began. The first band to play was SEVEN DAYS OF SAMSARA. It was their first show. Within the first couple songs the bass player/singer had already broken two strings off the bass and I believe a microphone got knocked to the ground a couple of times. I must admit that I don't remember how they sounded that night, I just remember the sheer chaos that this band put forth in their live show.

About two years later SEVEN DAYS OF SAMSARA toured out to New Jersey, where I was living at the time. I had totally forgotten about the band and their performance that night in Milwaukee. My first impression was made as they pulled up and the bass player/singer got out of the van wearing no shirt, but had a red and white leather vest on. He also had a huge black eye. This was an intimidating site.

They played that day and totally blew my mind again. Their outrageous energy was now more focused and hard hitting. I bought every piece of music that they had for sale and began pouring over the lyrics when I got home that night. The band seemed to take an earnest approach to the lyrics that I really liked. The CD came wrapped in a sharp metal grille which scratched/cut my hands every time I attempted to open it.

"Bury Your Head", was a song described by the bassist/vocalist Dave, as a call to be thankful for the people around you while you still have them in your life. There was a desperation to the lyrics and music that just clicked with me. It let me know this band was just putting it out there for you to see.

At this point I made it a priority to see SEVEN DAYS OF SAMSARA as often as I could. We were touring out to the west coast that winter and got to meet up with them in California. We pulled up to the show at the Munoz Boxing Gym in California, where we'd be playing in the middle of a boxing ring. Once again Dave intimidated the hell out of us by running full speed wearing one of those wrestling masks at our van as we drove in. When my band played our set Dave jumped off the turnbuckle of the ring, did a mid air flip and landed right on my back, totally taking me out for a good 30 seconds. 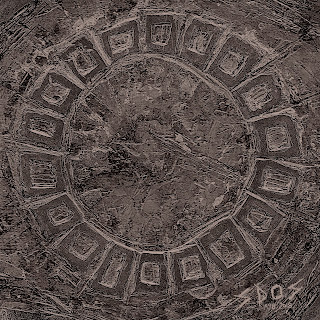 We played the rest of the week with them down to San Diego. I got to hear songs like "You Elbow Me, I Elbow You" and "New Anthem For the T-Shirt Revolution". Dave would passionately explain the meaning of each song before playing them. It was inspiring. We got home and made plans to head out to Milwaukee. There was a hotbed of creativity going on out there with bands like Forstella Ford, Since By Man, Protestant, Textbook Traitors and more. I felt extremely grateful to be touring in a band at that time.

The next summer when they came out to the east coast I made it a point to play with them again for a few days. They had released the three song "We're Already Dead" EP which, to me, was a perfect application of everything the band had done before, except this was taken even further.  The musicianship was creative, technical and well done. The lyrics covered coming to terms with the idea of selling your time to pay the bills and the complicated philosophy behind labor. Dave summed up the notion saying that no matter what you do you should "try to wake up with a smile on your face". I stole this line and used it for a song a couple months later. My love for the band was even further solidified.

Around 2003 the band slowed down, almost to a halt. Members were moving away or moving on to different things. They would play one show or so a year and stopped writing new music. I was sad to see this happen. Dave was moving forward with bands like Get Rad, High On Crime and LIFES. I made it a point to keep a close eye on all his new projects. Regardless, if I told Dave I was coming out there on tour he would do his best to get SEVEN DAYS to regroup for the show. I felt extremely honoured by this, but as the years went by it became very hard to get all the members in one place.

I was thrilled to hear about the discography. It collects a batch of songs that hold a very special place in my heart and represent a great moment in time. I only hope that a younger generation discovers it and finds as much value as I did in it.