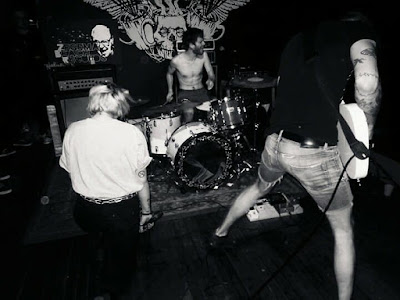 I gravitated toward COMMUOVERE after finding out early on in their formation that Gabriel and Jean-Christophe from Lonely Animals made up two-thirds of the band. I heard their 2015 EP in early 2016 and noticed strong similarities to the light and atmospheric sound of their prevous outfit. In early 2017 I saw them play live with Foxmoulder, Respire and Fraera in Toronto on April 15th and they fucking blew me away. Like, I was flabbergasted. And so was everyone else in attendance. To see why check out the review and videos from the show, linked here. I was surprised at how much more aggressive and dark it was, and immediately asked them if they wanted help releasing the LP they were writing for by speaking with all of the members, who were amazing. I found out that vocalist Marie was only 19 and this was her first band (or maybe just her first heavy band). JC was looking to move abroad and tackled vocals as well as guitar in this band, and of course the lovely Gabriel Wagner who runs Le Blast Records drums and does additional shrieking. I invited them back for Zegema Beach Records Fest along with The Ultimate Screamo Band and they fucking destroyed us yet again (linked here) before embarking on a US/Canada tour. After arriving back news came out quickly that COMMUOVERE had dissolved and I was crushed. Luckily I was able to convince the band to master a live version of an unrecorded song which ended up on the 10th installment of the Zampler compilation series on Zegema Beach Records.

Oh shit...but Dave, what do they sound like? Ahhh, good question Dave! Their debut release, the 'To love - to touch - to lose - to tears' EP has them at their slowest and most stripped down, as at this point it's just JC on guitar/vox and Gabe on drums/vox. The two songs are slow, plodding, chill, dreamy and very reminiscent of Lonely Animals, with opener "L'appel du vide" being a tad faster and chaotic than the lengthy and bedroom emo feel of "La douleur exquise". The following year they dropped a song on the 'Enjoy Life To This' tape/cd 5-way split with Te Lloraria Un Puto Rio, Fei Lung, Eva Ras and Unable To Fully Embrace This Happiness. The track, titled "Nothing burns like the cold." is the band's final somber recording, clocking in at 3:28 of repetitive instrumentals and group screaming. Correct me if I'm wrong but I'm pretty sure this is Marie's first appearance in the band.

I like their early stuff, but I looooove their later stuff. So in 2017 COMMUOVERE evolved from chill, emo/screamo to blackened emo-violence, and went all out and bust. They began with the sensational three-track EP 'Du besoin de disparaître de soi'. This thing was released on tape with three different versions by Le Blast, Adorno and Confusion Specialist, with an additional run of 10 cds on Le Blast (almost all of which I've scored for my personal collection). It opens with the absolutely stellar "Consommer l'absence" opens with 20 seconds of subdued feedback before the drum count in starts and then holy fuck, the whirlwind of screaming, discordant/frantic guitar and maniacal drumming comes in full tilt (and still knocks me on my ass every time). They would generally play a song titled "I Was Named After a Hurricane" right before blasting directly in "Consommer l'absence" and it was the best one-two punch I've heard in quite some time. "Dépersonnalisation - Déréalisation" is an ambient noise interlude complete with a lone, echoed guitar, rain, the sound of dishes clanging and crying, making it a fitting break in between the two other violent assaults on the senses. Closer "La tentation d'exister" is similar to opener but has more of an Orchid meets To Dream Of Autumn feel to it as it builds to the precipice at 36 seconds and goes fucking bananas at 46 seconds, making this section my favourite of anything COMMUOVERE ever did. The song breaks and separates, slowly dissipating in intensity until its 1:59 close. Dear lord, I wish we had an LP, goddammit.

On the heels of the 2017 EP came their contribution to the Jeromes Dream tribute cassette 'It's More Like an Homage to You' with "What Other Adjective Would You Have Me Use For The Word Good?". After the initial round of 40-something bands came back with only 18 bands actually recording songs for the comp, I was forced to reach out again to try and rope in a few additional good screamo bands to round out the tribute. COMMUOVERE was part of this second cohort and they were able to write their version and record it in something stupid like two to three weeks, and it's easily one of the best songs on there. Not only that, but they didn't just clone the original, they made it COMMUOVERE and they made it a rager. Around this time the band did an initial small tour by coming from Quebec to Toronto on April 15th, gaining an instant reputation in Toronto as "the band to see" because, let's face it, they fucking owned. In the summer they went on a trek throughout Canada and the US alongside friends in The Ultimate Screamo Band, with the second show (I think) being my Zegema Beach Records Fest show and, again, people were astounded by these three people. I've linked a video from each set in the embed section below.

The band was even slated for a spot at 2018's Miss The Stars Fest, but communication in the group halted and they disbanded in the fall of 2017. At the tailend of 2017 I was getting the tracklisting for the Zampler #10 compilation and asked if there was anything, ANYTHING, I could put on there that they never released. Gabriel informed me that he had the stems from a live recording for a song they never got the chance to immortalize, so I coaxed him, JC and Marie into mastering and releasing the song on the Zampler. I'm so glad that I pushed for that cuz "I Was Named After a Hurricane" blazes and was generally played directly before "Consommer l'absence", as can be seen here. It is 1:44 in length and was recorded live at ODTHQ in the early summer of 2017. It has an eerie opening that erupts after 30 seconds and goes batshit crazy around 47 with strong ties to Orchid on speed and The Ultimate Screamo Band. The close from 1:15 onward is so fucking exciting and builds to a faux-climax as they ready for an onslaught but instead abruptly end the song. You bastards! Jokes aside, watch this live video and see it coupled with another banger.

It's damn ass fucking shame that COMMUOVERE broke up, but, alas, it must be for the best. We have already been graced with EPs from Gabriel's Au Bout De Mes Lèvres and La Nausée (with Shaun of Adorno Records and Thisismenotthinkingofyou) and Marie is in Dianacrawls who should have material out very shortly. I'm stoked to be able to say that I got to see COMMUOVERE twice in my lifetime and that's pretty fucking wild.

(2017) COMMUOVERE - "What Other Adjective Would You Have Me Use For The Word Good?" (from 'It's More Like an Homage to You')