CROWNING owns. Serious. I fucking love this band. The story still begins with the pre-CROWNING band Pregnancy Pact sending me their demo to review in early 2016. I dug the EP, told them I was going to review it, to which they responded that they broke up due to the bassist moving, but they would send me material from their new, heavier incarnation of Pregnancy Pact when the time came. Well, fast forward a few months to December 2016 and (at that time) I was poor at checking emails on a daily (or even weekly) basis, so I came across a two-week old email from the drummer Justin Orr asking me if I'd be interested in premiering a song from the CROWNING debut EP titled 'Funeral Designs' in about two weeks. I realized the time frame was almost up so I quickly jammed the song "Buddy Dwyer" and posted it as the premiere after emailing Justin back that I'd be happy to help out. But mere hours later after two more full EP listens I wrote him back, pretty much begging if I could help release 'Funeral Designs' on tape and if they'd hold off releasing it until early 2017. So that's how it started.

CROWNING's 'Funeral Designs' was released in its entirety on February 7th, 2017 with a stream on Form Und Leere (linked here). Title track and my CROWNING anthem "Funeral Designs" opens the EP, going full tilt in very Loma Prieta-esque fashion with a powerful barrage of drums, guitars, bass and screaming for the 20-second intro. It then hangs on thread for a few seconds before coming barreling down until 34 seconds. Here is where the song goes from great to fucking unbelievable, as it halts and everyone's screams ring out, "I dug this grave for myself, the ground is calling my name!". The subsequent flabbergaster of a breakdown is sensational, especially with that additional guitar melody layered over top. Seeing this part live with an additional, slower, heavier addition (linked here) was one of the greatest moments of my life. No joke. The following song, "Velleity" showcases their ability to weave softer driving elements with their heavy-as-fuck-stuff. The opening second crashes in and is abruptly silenced, which clears the way for hypnotic guitars from both Myles and Dave that build into a succession of waves that mesmerize and then destroy. There's also the drum count in at 52 seconds that brings a smile to my face every time I hear it. I think comparisons to Leveless' first/last recording (released a few months afterward this EP) are warranted, especially considering the powerful lower-end screams and general darkness shrouding the songs. Track three is "Swivet", an extremely quick but complete song that brings in strong bass grooves and a few induced head-bobbing moments, with an opening screaming exchange between Dave and Justin that checks all of the Dave boxes. I pretty much considered "Exposure" to be an instrumental tune for some time before being reminded that the opening space-trip does indeed come to end after 40 seconds and we are bombarded with unrelenting CROWNING screamy hardcore, with the comparable urgency and aggression of Youth Funeral. Closer and single "Buddy Dwyer" is yet another exceptional tune, relying on perfectly balanced instrumentation between all of the members, as many bands struggle with this cohesiveness. The transition at 18 seconds is superb and hot damn I love the vocal placement on this, as well as every other song! The stop/start thing follows with a swell at the one-minute mark that tapers off into a beautiful lullaby second-half with most of the band screaming in discordance. It was my #2 EP on the Best Of 2017 list right here on this blog.

This was one of the most DIY tapes I had done up to that point, so for the 70 tapes in the first run we got orange translucent cassettes that glow under a black light with spray-painted A/B sides using glow-in-the-dark paint. We wrapped these in a blanket of one-sided paper jacket in a resealable plastic sleeve. I think I have three more in the British Columbia Zegema Beach store (linked directly here) but after that they're all gone. We are pressing another 50 copies of red translucent tapes with my good friend Dylan of 3 Nines Compact Cassettes KW that will be out for the band's tour later this month with fellow Chicagoians Frail Body whom we premiered here. Tour dates below: 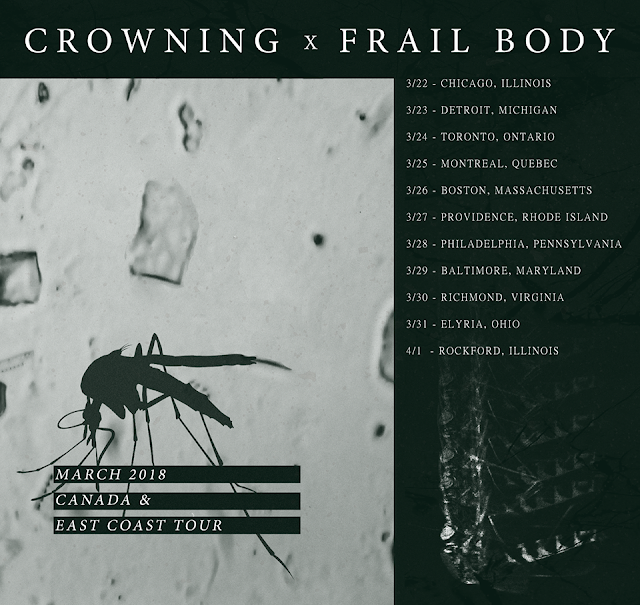 Not only did CROWNING make the trek to play my little ZBR Fest in June of 2017, they fucking killed it. It's not often I'm that giddy during a set, and I was pretty goddamned giddy. Here it is in its entirety.

Bassist Vanessa was also kind enough to make an alternate poster (out of 30, I think?) that you can still grab for purchase from Zegema Beach...but you might have to email us about it. Here's a picture of it, thanks Vanessa!!! 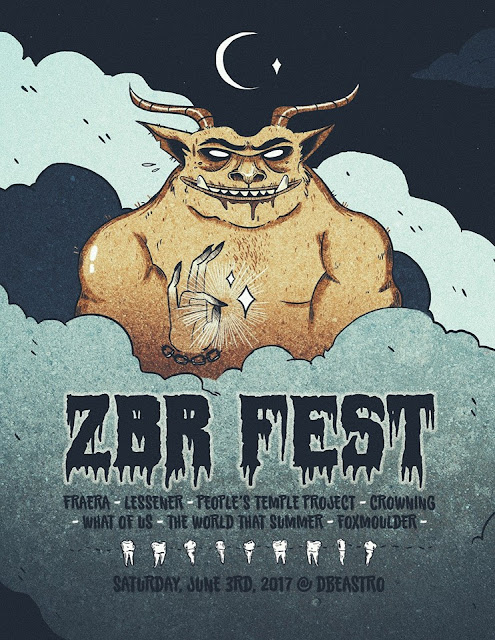 After they floored me at the fest, I asked if they were interested in doing a split with the project I do vocals for, мятеж. They agreed and after I recorded the vocals for the three мятеж songs I was told that the instrumental stems were pretty shot and weren't recommended to use on vinyl. Those songs ended up on a Carl Johnson split tape, premiered here. Sooooooo, being as I was in a new band in New Zealand called Swallows Nest at the time, I asked if CROWNING would be into changing their split partner. Considering we didn't have any recorded material, I'm sure they were a tad hesitant. But after hearing our pre-master version I'm hoping they relaxed a bit. I also sent them this video of us playing the song live at my final show with Swallows Nest.

During the writing process for the split CROWNING added James from Itto as primary vocalist, which shattered my mind as I thought the band could get no better, in addition making the total number of screamers utilized in most songs to three! After hearing an early rendition of "Coil" I went from salivating to fetal position and weeping. We premiered the unmastered version of "Coil" on the 'Zampler #10 - Goddamn Bugs Whacked Us, Johnny' (linked here) as the opening track cuz it's ridiculous. Today we premiere the second track "Old References" and the third song "Nerve" will premiere in April alongside the Swallows Nest side, a single track titled "A Subtle Knife for New Doors". The premiere will include pre-orders from the awesome labels involved, including Dingleberry Records, IFB Records, Time As A Color Records and yours truly, Zegema Beach. Preceding the 300 black vinyls will be 40 exclusive tour/test press editions with alternate covers for the band's March/April tour in the U.S. and Canada, so grab one off them or nab one of the five ZBR will have up in the store when the pre-orders go up.

I have also heard a CROWNING cover is on its way out into the world late 2018, and in the same session recorded a few new tunes that I haven't had the pleasure of listening to (yet) but will be sure to do my best to help get them out into the world once they become readily available.

Okay, so, holy shit that was a long fucking review/intro for five songs. Damn. That serves as a testament to my love for CROWNING, without a doubt. So lets' get to the premiere and my thoughts on their three songs on the upcoming 'Swallows Nest split 7"'. Right away, from literally the onset of "Coil", the shift and focus on faster, darker and more chaotic screamo is blatantly apparent, perhaps most so because of the myriad of screamers and pulverizing instrumentals all contained (barely) in a breath over a minute. I love the entire opener, but that climax from 50-1:05 is absolutely phenomenal. Like...wow.

This brings us (really, Dave? Yes. Really...Dave.) to the exclusive premiere of "Old References" and its corresponding music video, with its hilarious assortment of slow motion dog stuff. The song, at 2:18, is more than double the length of either of their other contributions and probably the best all-around effort to date. The song creeps in with an eerie and atmospheric intro that Truman fans will love, and the initial onslaught rights itself at fifty seconds to a driving, shockingly danceable section. This brings up the best part of the song (1:06-1:20), Justin's drumming. Bloody hell, these are particularly staggering, with fluid flurries that give this track a very unique and exciting flavor. At 1:27 the instruments take a breather with a sick, catchy lone guitar progression leading everyone back in to form the song's outro. Good lord I love this song.


The final track on the CROWNING side is titled "Nerve" and it's about a minute of James-heavy vocals and typical CROWNING amazingness with a silencing stop/start in the middle, pulverizing instruments near the end and gang vocals of, "I hope for the strength I see in my friends!". I would posit that this is also the most Itto-sounding of the three. If this was an EP it'd be at the top of my list for 2018 thus far, as biased as I may be.

So there you have it. I love CROWNING. Do you? (this should be redundant at this point)