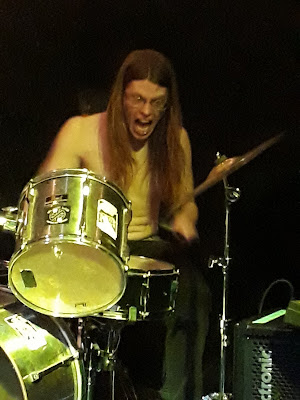 On March 16th, after what seemed like a very, very long time (but was actually only three and a half months) I went to a show. And it was awesome. Not just with the music, but the atmosphere and vibe at this (pretty much) all locals gig was warm, inviting and wonderfully friendly. I was basically attending because my new friends here in B.C. play in TERRIFYING GIRLS' HIGH SCHOOL. I was also aware that EMMA GOODMAN had two members of Dad Thighs and it was their debut tape EP release show. Plus I got to distro and meet a ton of other awesome people that I'd likely not have spoken to. To anyone who said hi and/or bought something, y'all were super nice and I can't wait to frequent more shows. Extra thanks to Jill from Dad Thighs and Carson for putting on the show, doing the door and letting me distro. So here are all four bands in the order they played. What a fantastic start to my B.C. experience!


DUCK!
First up was DUCK! from Vancouver. The quintet played a mixture of playful emo twinkles (without a ton of twinkles) and pop-punk. The vocalist really separated this band from others of the styles and brought The Cranberries to mind before anything else, perhaps because of the warbly nature of delivery. She also had to go through two mics before finding a third that didn't cut in and out. Because of that, I've embedded the second of the two songs I recorded below as the mic was working properly, although I'm struggling. In terms of sound they were kind of the odd one out but I generally like a change-up when all of the other bands are hardcore related.

TERRIFYING GIRLS HIGH SCHOOL
I've spent my only social hours since arriving in BC with friends Miggy and Dov of TERRIFYING GIRLS' HIGH SCHOOL (aka TGHS) so it was cool to finally see them play a show. Although, truth be told, I've seen them both play as members of Diva Plavalaguna during a few of their practices and that's all I knew them from in a live setting. In TGHS Dov moves from drums to just vocals, while the Matts take up drums and bass. Did I say bass? I should have said six-string sass bass, cuz holy shit Matt was fun to watch and even more fun to dance to. The band plays a sassy, quirky style of screamo that I would put somewhere between The Blood Brothers and Innards but they've definitely got their own thing going on. So check it!

EMMA GOLDMAN
I've heard that EMMA GOLDMAN was a more than decent 90s-sounding screamo project featuring Félix and Victoria of Dad Thighs (linked here). I jammed their recently released EP online and picked up three copies from Félix the moment I stepped into the venue, keeping one and posting the other two for sale right here. By the end of the night the 30 copies of the first run was depleted to 9...so yeah, people here know how good this band is. The three-piece plays a melancholic and atmospheric post-rock/emo that generally builds to screaming post-hardcore/screamo. There's a bit of driving punk/shoegaze that reminds me of later Animal Faces and Solids as well as heavier and chaotic moments that are more akin to Drive Like Jehu and earlier Animal Faces. I also spoke with the drummer and bassist (Victoria also sings in Dad Thighs) who seemed like awesome people so I'm stoked to see them again. I managed to film their entire set as one 19-minute video for your viewing pleasure.

ffo: Drive Like Jehu, Indian Summer and Animal Faces
Bandcamp
Buy a tape from the band here or the ZBR distro here

ROBERTCOOPERPHILLIPS
I'd never heard of ROBERTCOOPERPHILLIPS before, but prior to their set I was able to meet every member of their band as they came over to peruse the distro and say hi (Sarah especially, she bought pretty much every SeeYouSpaceCowboy release 💖) and they were all extremely friendly. They were the only band not from Vancouver and made the trek from Vancouver Island (Victoria, to be exact) and are comprised of a noise specialist, a keyboardist, a guitarist/screamer and a member of Slow Release (linked here) on drums/vocals. They were, for a lack of a better description, fucking crazy. The insane shrieking from the two vocalists were ear-shattering with the band's awkward and disjointed style of emo-violence being well-received by the crowd (myself included) and were invited to watch a crazy movie after the show with some "food". If I wasn't driving an hour and a half home I would have hung out with them for sure. Next time, my friends. Next time.