An Interview with
JOSH JAKUBOWSKI
of:
Neil Perry / Joshua Fit For Battle / Hot Cross / The Now / Superstitions Of The Sky


On April 1st, 2015 I got an email from someone named JOSH JAKUBOWSKI. I saw the name in my inbox and I nearly fell into the center of the Earth. Seriously, this guy has been one of my musical heroes since I first got the Neil Perry / Joshua Fit For Battle split 12" back in 2003, followed shortly after by the 2xcd 'Lineage Situation' discography. Not only did he play in both bands, but he was a large part of the early/mid screamo era of the late 90s and early 2000s, spending time in Hot Cross, The Now and Superstitions Of The Sky. After reaching out to me we quickly scheduled part one of an interview podcast using skype and completed it in no time. After numerous attempts over the last two years we've been unable to connect at the right time so part two is not yet complete. So in part one you will notice that The Now and Superstitions Of The Sky aren't even been touched on, but I'm hoping this post will act as the catalyst for finishing up part two. In part one we discussed a bunch of stuff including (but not limited to):
- his arm injury 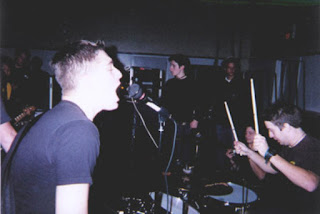 This is also the first post since we hit 1,000,000 views on the blog. Thank you to everyone who has visited and all of the bands that have been reviewed here, as well as the ones who have submitted and we haven't been able to accommodate. We won't be stopping. 💓💕💗💘💝💞💟
Posted by Dave Norman at 23:36